Excerpt from Spotlight on Young Children: Social and Emotional Development

An aggressive behavior can evolve into bullying when it is a negative action, implemented and repeated over time (Olweus 2003). It is best to step in to address these situations early and follow up with continuous reminders and positive guidance so children can learn appropriate ways to express feelings and desires. As a starting point, open the lines of communication with children by discussing bullying. An effective way to begin this conversation is by reading books together and discussing them.

Three Types of Aggression in the Preschool Years

For preschoolers, a combination of developmental and environmental factors may play a role in using aggressive behaviors that over time could become bullying. Three distinct types of aggression frequently occur in the preschool years: physical, instrumental, and relational.

Katya, a 5-year-old, is frequently physically aggressive toward Sera. When Katya notices that her teacher is distracted, she kicks Sera.

Socialization skills are just emerging in preschool, so many children are not familiar with sharing toys, space, and the teacher’s time with other children. This sometimes results in physically aggressive behavior, such as hitting, pinching, pushing, and kicking. When there is an imbalance of power between children, it can lead to bullying to achieve dominance. The Grouchy Ladybug, by Eric Carle (preschool–grade 2), addresses physical aggression.

Three-year-old Sayf insists that he is the only one who can play with the green ball. When any other child tries to play with it, Sayf grabs the ball and sometimes pushes the other child away.

In young preschoolers, behaviors such as hitting, pushing, and grabbing to get a desired toy or snack are common. This object-oriented aggression is called instrumental aggression. Its emergence could be due in part to a combination of developmental and environmental factors. At this age, many children are unable to understand or take the perspective of another (Piaget & Inhelder 1967). Also, some preschool-age children (particularly young ones) lack the language skills and ability to accurately express their wants and needs. Over time, instrumental aggression can evolve into bullying when it is repeated and there is an imbalance of power between the children. Share Molly Bang’s When Sophie Gets Angry—Really, Really Angry . . . (preschool–grade 2) with your class.

Elizabeth, who is 4, wants to join a small group of girls playing. She asks, “Can I play with you?” Romana, speaking for the group, responds, “Yes, but only if you are the little sister and do not talk.” Thus, the acceptance is conditional.

Teachers and parents may hear 4- and 5-year-olds engaged in exclusionary interactions such as “You can’t come to my birthday party!” or “I won’t be your friend.” When these behaviors are repeated and elevated to hurtful levels, they are called relational aggression, which is “the intent to harm others by removing or threatening to damage a relationship or feelings of social acceptance and inclusion in social groups” (Ostrov et al. 2004, 356). Frequent and extreme use of relational aggression is a form of bullying. Trying hard to fit in is the topic of A Bad Case of Stripes, by David Shannon (preschool–grade 2).

From Spotlight on Young Children: Social and Emotional Development, edited by R. Procopio & H. Bohart. Copyright © 2017 by the National Association for the Education of Young Children. 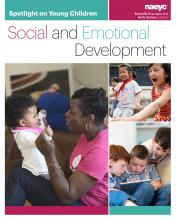