“My kids are teenagers now and they’re going off on their own. And you understand it. But it’s hard not to hurt…” On a “Humans of New York” post, there was lots of chatter about the father who spoke about his children, but it was mostly centered around how much he looked like Saul from Breaking Bad (maybe it was him!) But for me, it was his message. Kids going off on their own. With my youngest child now officially a teenager, I understood.

When your kids are little everyone says, “Treasure this time. It goes by so fast.” When in the midst of changing diapers or getting the call to pick up a sick child from school, it’s hard to believe that being there, wanting you, needing you is a period in time. It’s over all of a sudden.

My kids no longer willingly join on weekend trips to the museum. When at home, their bedroom doors are usually closed. Trips to the neighborhood park are long gone.

The other day my daughter invited a friend over. She just happened to invite her at the same time her piano teacher was scheduled to give her a lesson. “Can I skip this week?” she asked? Not without advance notice. So while my daughter played the piano, I had the opportunity to chat with her friend. " Leah said she and her brother had a secret language when they were little. Did they really?" Her friend asked as I offered her something to eat. “Yes. Yes they did." I responded.

As parents of teenagers know, any communication with your child’s friends can lead to accusations of being horribly embarrassing. So I treaded lightly. I didn’t exclaim, “She remembers her childhood fondly! What else does she say?” I simply elaborated, "When she was a baby she and her brother babbled back and forth to each other. They called it their secret language."

Your child’s teen years can quickly creep up on you. One day you’re all piling into the car on a Saturday afternoon to pick apples and the next thing you know, whatever it is you’re doing on the weekend, it’s most likely without the kids. Now I’m all for going to yoga, lunch with friends, and movies with my husband, but weekend activities without the kids – it’s an adjustment. And like the New York guy who looks like Saul, it sometimes hurts.

Back in the day though, whole weeks could be filled with just hanging around with the kids while they played. And when they played it was often together. As soon as my daughter started making sounds, my son jumped right in to respond to her, to play with her. If she gurgled loudly, he gurgled in return. Back and forth they would go. “It’s our secret language!” he would tell me. And it did feel like they had something special going on together. The giggles, the funny sounds, and the secrets they shared. My daughter’s friend went on to tell me all the ways her own younger sister annoyed her: she cried all the time; she tagged along; she ruined everything. Wait a second, I thought. My kids were telling their friends nice stories about each other! 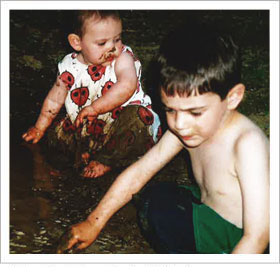 In Five Essential to Meaningful Play Walter Drew and Marcia Nell describe how family play experiences are essential to family bonding. I had shared my own childhood recollections within their article: “One of my clearest childhood memories is slithering through the tall grass like a snake with my brother and sister.” But even though my own memory was about play with my brother and sister it had never really occurred to me what these play bonding experiences meant for my own kids and their relationship with each other. So when they close their doors, leave with their friends, and spend minimal amounts of their free time with us and with each other. I'll remind myself that they are teenagers - that's what teenagers do.

And I’ll be thankful for the play experiences they shared together when they were younger. As Walter Drew and Marcia Nell say, “Memories of joyful and meaningful play experiences help bind families together emotionally, even long after children are grown.”