Buon Appetito: Sharing a Love of Food with Infants and Toddlers

Let’s get the disclaimer out of the way first: in my Italian American family, I’m the only one who obsesses over dinner while eating breakfast. To say I love food is an understatement. So when my son, Henry, arrived in 2012, I was determined to share my passion with him.

For inspiration, I didn’t need to look far. Growing up with Nonna, who was born in an Italian mountain province, I learned how to roll dough into gnocchi and enjoy the peppery taste of oregano. She taught me that there’s a difference between eating and eating well.

The question was – how old did Henry have to be before I could share my love of food? Could I share this passion with him while his food consisted of pureed vegetables or bite-sized finger foods?

In my quest to live Nonna’s credo and expand my bambino’s palate, here’s what I’ve learned:

(Note: Consult your pediatrician for information about when to introduce solid foods and about which foods to offer infants and toddlers. Here are some guidlines from the American Academy of Pedaitrics.)

Lesson #1: Though Nonna was a slow food goddess, my schedule (working part-time, pumping--which felt like a second job-- and sleeping less than a college student) required convenience when Henry started solids. I sometimes purchased squeezable purees. But when I did some sampling and looked at the ingredients, I found that fruits often mask vegetables - until peas no longer taste like peas. Channeling Nonna’s gift for homemade cuisine, I began to blend my own purees: Turkish apricots, lentils, root veggies, and even fish. When Henry graduated to whole foods like diced cucumber, soft cheese, and raspberries, he enjoyed trying new flavors and exploring different textures. My take-away for busy parents: Although making your own baby food isn’t an option for everyone, it is just as easy to peel a banana, as it is to twist a cap off of baby food. 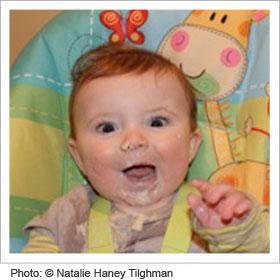 Lesson #2: Though I was clearly the sous chef in Nonna’s kitchen, she always welcomed my help. Although he’s still a toddler, I do engage Henry in making meals, a great sensory experience. I point out foods that he likes in the store and encourage him to smell and touch produce. He has a pot and spoon in the kitchen for “cooking” as well as a jar filled with dry quinoa that is fun to shake. We read board books with bright pictures of fruits and vegetables and I bring foods to his high chair before cutting them. He loves to touch the kiwi’s “fur”! Once Henry’s skills grow, I look forward to having another cook sharing the kitchen with me.

Lesson #3: Nonna served food family-style, which made eating a social event. I engage Henry in conversation at meals where we often talk about (what else?) food. But sometimes, we sing or read a book instead. My hope is that Henry will associate food with fun instead of nagging. In the family-style tradition, I also sample everything on Henry’s plate, so that he can see me taking pleasure in the same foods, which usually means opting for baked sweet potato over potato chips. Henry’s now a toddler and among his favorite foods are cucumbers, Provolone cheese, and chickpeas. These days, Henry is just as much my teacher as I am his when it comes to eating well. I am rediscovering certain foods, engaging in healthier habits, and remembering how exciting each and every taste truly can be.

Nonna would be proud.

Please consult your pediatrician for information about when to introduce solid foods and about which foods to offer infants and toddlers. Here are some guidelines from the American Academy of Pediatrics.

Natalie Haney Tilghman lives with her husband, son, and Chihuahua in suburban Chicago. She is a freelance writer with a background in social work whose work has been published in many magazines and anthologies.