Number path games, when played like board games, are ideal for helping preschool children learn math. These games build children’s understanding of early math concepts, such as counting and comparing numbers, while giving them experience with a valuable math tool—a number path.

Teachers may wonder what the difference is between a number path and a number line (both are shown at right). A number line is a tool that shows the distance between whole numbers, like a ruler. This tool can be confusing for preschool children if they land between numbers as they are counting. A number path is a counting tool—each number is written within a rectangle or other shape, and it is easier for young children to use when counting. In a number path game, children build confidence as they practice counting, use one-to-one correspondence, and learn that numbers come before and after other numbers. Having experience with a visual model like a number path will help preschool children be prepared for kindergarten and later mathematics learning.

"I am excited when children play the game and start recognizing numbers and reciting them from 1 to 10."
—Ivonne, Lawrence, MA

What will children learn?

In a number path game, numbers are evenly spaced along a path that moves from smaller to larger numbers (e.g., 1 to 5). Children move along the number path—and practice several math concepts—by rolling a die or using a spinner.

For these definitions of mathematics concepts and a summary of how children progress in developing them, see “Early Math Concepts Related to Numbers and Counting.”

At this age, children are still learning how to play games and are practicing skills like taking turns, moving pieces, using dice, and counting out spaces. These skills are important in and of themselves because they allow children to access other opportunities for board game play. Many board games have mathematical elements—including counting, counting on, numeral recognition, logic, strategy, and classification—that are worthwhile and can extend children’s learning in and out of school. For most children, building game-playing skills takes time, patience, and explicit support.

Jumping on the Lily Pads 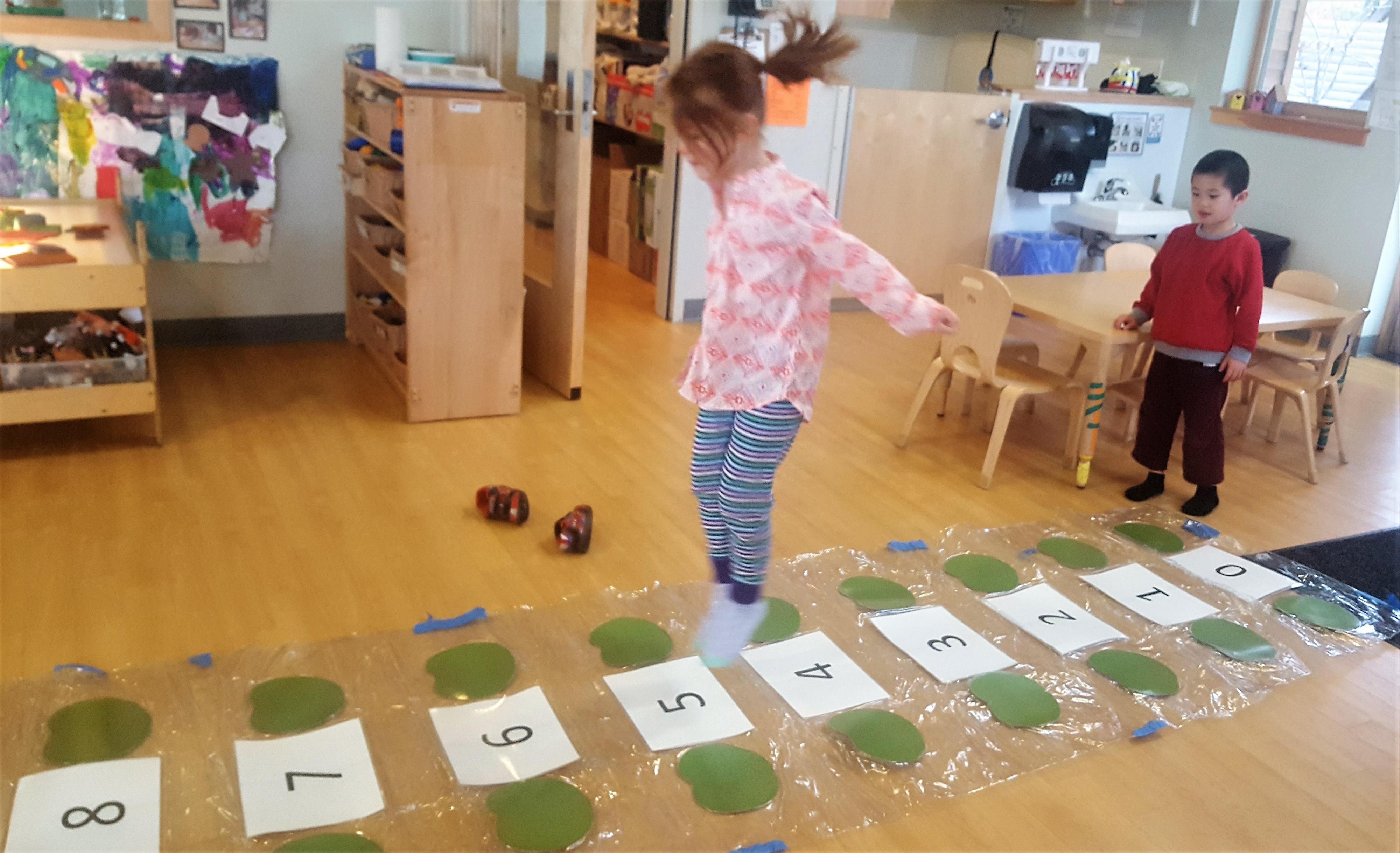 Jumping on the Lily Pads is an example of a number path game that can be played as a board game or in a larger version on the floor. Children take turns rolling their die and moving their frog token along a path of evenly spaced, numbered lily pads leading to a pond. The goal is to be the player whose frog reaches the pond first.

Focus on gaining familiarity with the number path, understanding that numbers come before or after other numbers, stable counting order, one-to-one correspondence, and counting on.

This game asks children to integrate many concepts. When children roll the cube, they have to use their counting or subitizing skills to know how many dots in all. They have to remember the number that was rolled and then jump that many spaces—one space for each count (one-to-one correspondence). They also have to know when to stop jumping (cardinality) and roll again. 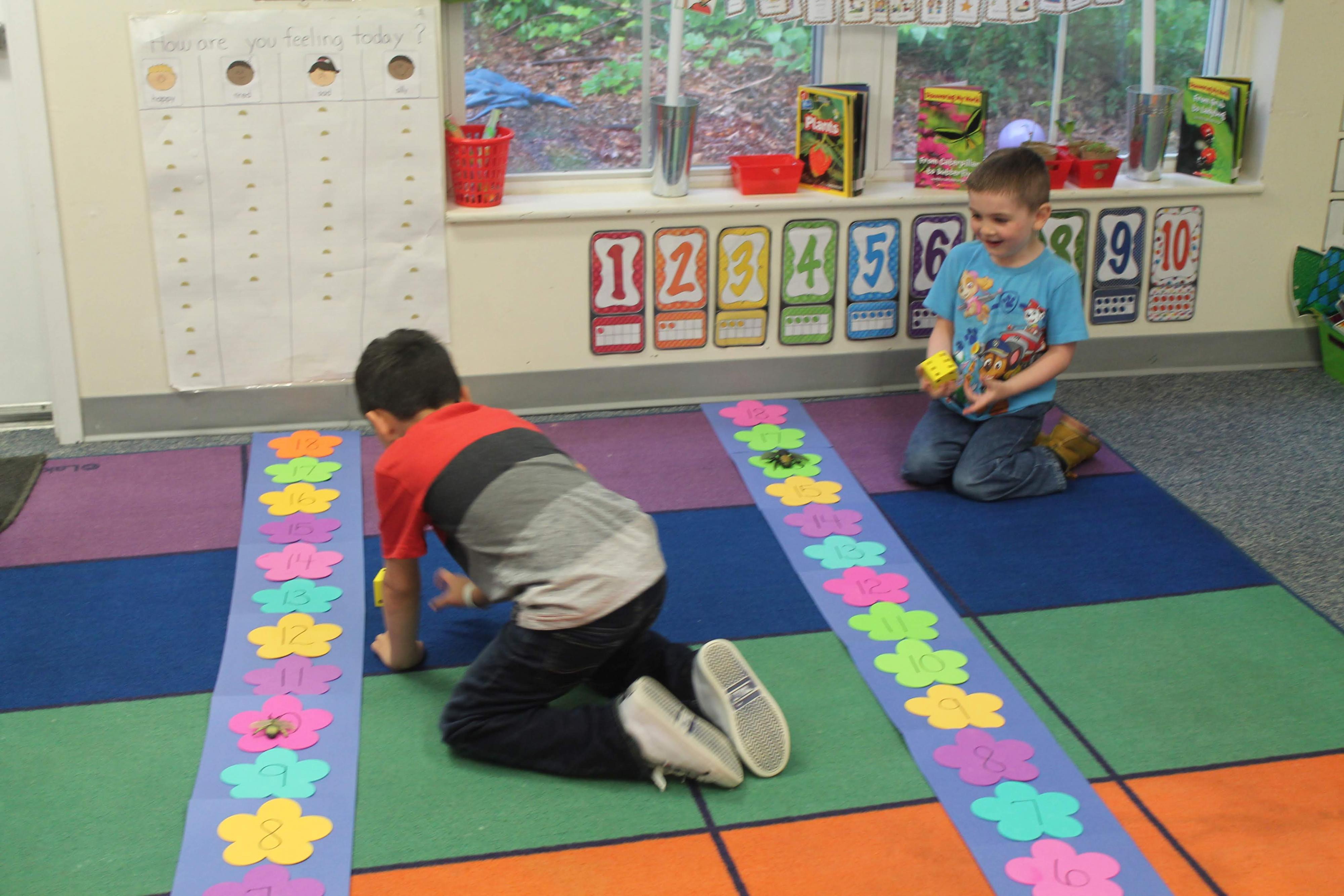 As children gain confidence in those skills, they can start paying attention to the written numerals they are jumping on. You can ask children which number they started on and which number they landed on. Playing this game, children are learning the relationships between number words, quantity, and written numerals. Help them learn to describe what they’ve done by summarizing it: “You started on 4, jumped two spaces, and landed on 6.” When you think they are ready, you can ask them to describe their moves.

"Jaime moved from playing this game to making his own jumping game using green felt pieces on the floor, rolling the die, and jumping on the lily pads on the ground, counting as he jumped."
—Kellie, Holyoke, MA

Playing the game on a life-size board, where children do the jumping from one numbered space to another, helps them better understand number paths and get excited about board games. Having children be the tokens that jump on the number path provides an ideal context for learning how to count on from the number they are standing on.

Focus on number magnitude, understanding that numbers come before or after other numbers, stable counting order, one-to-one correspondence, and written numerals. 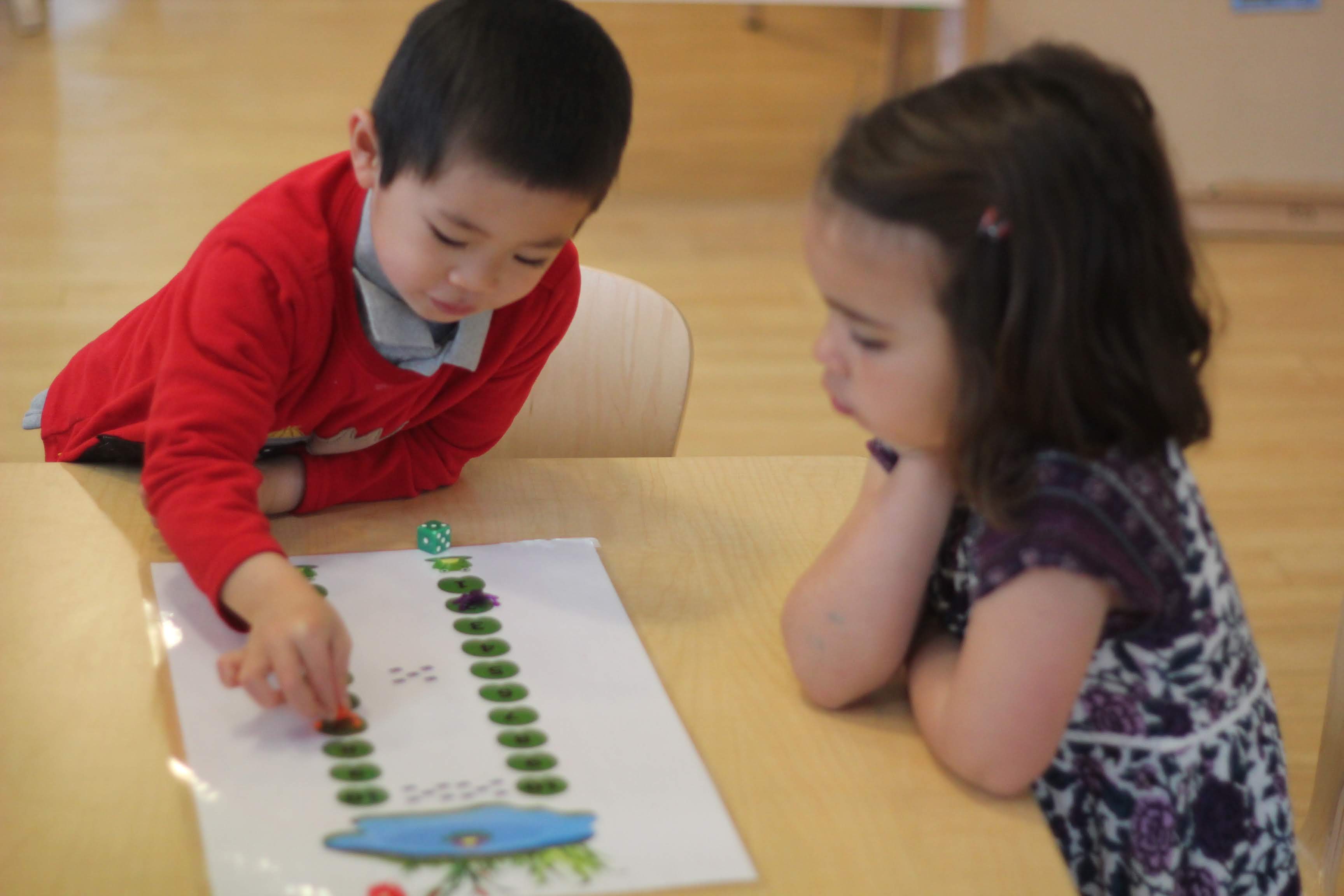 The numerals on the lily pads are arranged vertically. We want children to see that as they move from 1 to 5 or from 1 to 10, they are moving farther from the start (home). We also want them to see how much farther: 10 is a lot farther away from 1 than 2 is from 1. Preschoolers are developing their understanding of number magnitude—knowing that 5 is greater than 2 and beginning to understand how much greater. Each time children jump on the lily pads, one by one, they are reinforcing kinesthetically that each number gets bigger by one jump. Jumping also helps them understand that the distance between consecutive whole numbers is the same—10 is one jump bigger than 9, just as 2 is one jump bigger than 1.

"It’s nice to say, ‘I want to play a math game with you’ and have the response be ‘YEAH!’"
—Katie, New Hampshire

Game 3: Number Path with Counting On

Focus on number magnitude, understanding that numbers come before or after other numbers, written numerals, and counting on.

Counting on (instead of counting from 1) is hard and takes practice! It is especially hard for adults who are used to counting from 1 each time they move on a game board. Make sure to give yourself time to practice before introducing this to children.

"I am excited to see the progress of the children as we are getting further into the program. I can see the wheels turning when we are playing the games and it is wonderful to see them figure out challenges." —Erin, New Hampshire

Even though this version is difficult, it’s worth the work for the extra skills children develop. Counting on while playing helps children focus on the numbers, how far they have gone, and what numbers come before and come after. Children also gain skills in number estimation and number magnitude. In elementary school, they are better prepared to use the counting on strategy when they learn addition. Give this version a try!

Templates for lily pad number path games can be printed from ym.edc.org/jumping-on-the-lily-pads.

For each pair of children playing, you will need the following:


Tips and suggestions for playing


Questions to ask during play