The Science of Superheroes 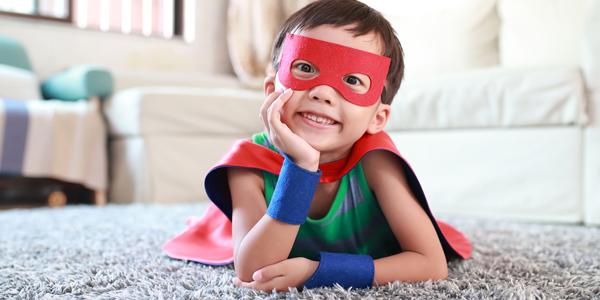 “I’m Batman! There can’t be two Batmans! You have to be Robin!”

These lines are from a scenario that played out over and over again on our playground: the superhero game. Usually it involved three or four children running around the playground, bodies going full tilt. They carried their weapon of choice (sticks, a plastic shovel) and screamed about how they were going to catch the bad guys. It would end in one of three ways.

We—Sarah and Meredith—knew better than to try to stop these preschoolers from playing: not only would it be developmentally inappropriate, it also wouldn’t work! We knew that something had to change.

As we watched, we realized that their scenarios weren’t evolving because their knowledge of superheroes was limited. They knew only the chase, catch, and kill-bad-guys scenarios presented in popular media. If we wanted to change the story—and the play—we had to provide more information.

As it happened, we had a perfect opportunity to address the problem. Built into the preschool curriculum was time to study whatever most interested the class of 3- and 4-year-olds. We could focus on one topic, concluding with a classroom museum exhibit for families to attend. The children would serve as curators, exhibit designers, and docents who explained to families what they had learned. It was clear that we should spend the time adding to the superhero narrative. As a bonus, we wove in science by studying superpowers in the animal kingdom.

In preparation for the study—The Science of Superheroes—we stocked the classroom with superhero books. Some were picture books, and some were junior graphic novels designed like comic books but with age-appropriate content. We hung a large piece of paper on one wall so the children could collaboratively draw and create the city they were protecting. We began the study with a group gathering to list what they knew about superheroes and what they were curious to learn. Teachers used these facts and questions to guide the rest of the study.

“We like stuff that is superhero stuff! We save the day! And we don’t wear sweaters or crowns or princess dresses.”
—Leah and Ellie

Every good superhero needs an origin story, the backstory that explains why the character became a superhero or how the superhero gained superpowers. The class spent the whole first week coming up with their stories. To make sure the children had well-rounded alter egos, the class focused on superhero names, costumes, and superpowers. This let us see what the children were already thinking about superheroes, what knowledge gaps they might have, and whether there were any ideas we wanted to challenge. For example, we wanted to help the children question the idea that girls can’t be superheroes.

Creating superhero personas became the foundation for the exploration. Identities shifted as the children gained new knowledge and more confidence in who their superhero was. Penelope, who started off as Wonder Woman, declared herself Rainbow Girl partway through the study, leading her to re-create her entire persona.

The most critical discussion of the first week was about sidekicks. Many of the problems witnessed in superhero play came from one child declaring himself the superhero and relegating a friend to the role of sidekick. For a full day we focused on this challenge. Children worked together to complete relay races and ice-breaker games. Lessons about working together held more meaning when the children thought of it in terms of teammates and sidekicks who help each other, not just children who are expected to cooperate and play nicely together. With superheroes, no one is fully in charge; everyone has to help.

During that sidekick day, we teachers made two new observations about the superhero play. First, the children did not cling to the superheroes they knew from popular culture. Sure, there were plenty of Batmans and Batgirls (and even a Superman who wore a Spider-Man costume); but we also had Super Pig, who carried a Pig Wand that made witches disappear, and Super Dog, who wore a superhero robot costume.

Second, superheroes were cross-cultural and didn’t exclude children who weren’t familiar with traditional American superheroes. Hiroko, whose family is from Japan, came dressed as Baikinman, a villain from the popular anime show Soreike! Anpanman. Normally shy and hesitant to talk, she was excited to play this character and found ways to engage with other children on the playground.

The main purpose of this in-depth study of superheroes was to help shape the narrative in the children’s play. To do that, we wanted them to think about why superheroes do what they do, not just how they do it. By focusing on the idea that superheroes help people, we could open children’s eyes to the real-life superheroes they encounter every day.

The 3s classroom is located in the Smithsonian’s National Museum of American History, in Washington, DC. The museum is a daily component of the children’s lives, and the people who work there are part of the children’s community. During the study, we took time to point out staff and volunteers to the children when they visited the museum. We talked about the different roles they had. We invited the children’s favorite art enrichment teacher, who volunteers a lot in the community, to talk about volunteering and what she does to help people. The children had always been friendly to the museum staff, but we wanted them to do more than wave. We wanted the children to think about what these individuals do.

Two important points came from our discussions: Superheroes help other people, and even though they don’t always get thanked, superheroes still feel good about helping. The teachers found it difficult to create an age-appropriate lesson that communicated the idea of people being in need and how everyday superheroes could help. However, since the class had experience using art to discuss diverse topics, we based the lesson on the painting “The Tragedy,” by Picasso, and the book Boxes for Katje, by Candace Fleming. Using images that convey people’s strong emotions gave the children a way to connect with the abstract idea and a safe space for brainstorming ways they could help others.

The everyday superheroes also inspired two class projects. The first was organizing a food drive. The second was making thank-you cards for all the superheroes in the school and museum. The children dictated to the teachers what they wanted to say, and many cards said “Thank you for being a superhero” or “Thank you for keeping us safe.” On card delivery day, the children dressed as superheroes and personally delivered the cards to school administrators and museum staff.

Week 3: The science behind superpowers

“My ponytails can shoot fire! Or put out fire. We have fire skills!”
—Leah

In the third week the children let their imaginations turn to all the superpowers that fictional superheroes might possess. This also gave us the chance to weave STEAM into the lessons by focusing on a fictional superpower and the real-life animal that uses it.

We read Halibut Jackson, by David Lucas, and the children talked about the purpose of camouflage. Then the class visited the Butterfly Pavilion at the museum and identified different types of camouflage, such as fake eyes and color variations. In the classroom, the children designed butterflies that could be camouflaged on a colorful art print.

Teachers laid a 90-foot-long rope on the playground and timed the children running the full length. Then we showed the group photos of a cheetah and explained that at top speed, it could run 90 feet—the length of the rope—in one second. We repeated the experiment, inviting the children to run while we counted in seconds. This gave them a concrete way to compare their super speed to that of a cheetah.

Comparing human and bird bone structure gave the children a chance to explore why birds can fly but humans can’t. Since humans can’t fly on their own, the children explored the concept by flying paper airplanes and playing with the classroom parachute.

In the final week of the superhero study, the preschoolers demonstrated their knowledge by creating a museum exhibit for families. They collaborated on a comic book titled Super Koala (Koala is the class name) and put the finishing touches on the mural of Koala City, which by that point took up most of one classroom wall. For the grand opening of their exhibit, the children decorated individual capes (made from donated pillowcases) with the first letter of their names. Meredith interviewed each child for a class video. The children also carefully dictated labels for their projects and helped arrange them in the classroom.

Most important, each child chose a museum job and created a name tag listing his or her job title and superhero name. Exhibit designers kept the displays neat. Conservators worked with teachers when something broke. Docents answered questions about the exhibit. Security officers made sure everyone followed the rules. These jobs reflected the children’s understanding of the roles of everyday superheroes in the National Museum of American History. They gave each child a purpose during the classroom exhibit opening.

During the grand opening, the children proudly pointed out their projects and read books and graphic novels with their families. They zoomed around the room in their capes as they led their families to see “one more thing!”

One of the most difficult things about any long-term study is looking back and asking, “Did it work? Did we do what we set out to do?” The monthlong superhero study was especially busy, so teachers postponed their usual reflections and evaluations until afterward. The exhibit, however, provided plenty of photographs and work samples to help the teachers look back.

We learned that superhero-themed reading material, especially graphic novels, brought a new reading energy to the classroom. With limited words and expressive pictures, the graphic novels encouraged collaborative reading, with multiple superheroes gathered around to help tell the story.

The children’s attention to detail in projects reflected their high levels of engagement and comprehension. They often repeated the cheetah super speed experiment on the playground. Children who normally raced through art activities spent more time on their butterfly projects.

The study also provided a long-lasting connection to our museum community. The center director became a more admired figure in the children’s eyes for her work to keep us safe, and the children spoke with new appreciation for the museum’s security officers and docents.

With a more developed understanding of superheroes, the children gained a new vocabulary, and conversations were more complex. The teachers could guide children’s superhero play, encourage teamwork, and suggest alternative story lines. Superheroes also became a common play theme for everyone, which led to different friend groups playing together with less friction.

Our biggest affirmation of the study’s effectiveness is that the children remember it. Penelope’s mom recently told us that her now–first-grader wanted to check out Superhero ABC, a very popular book on our shelf that year, and read it again. 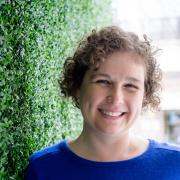 Meredith Downing is an early childhood educator with a background in museum education and technology integration. She recently received her master’s in learning, design, and technology from Stanford University.