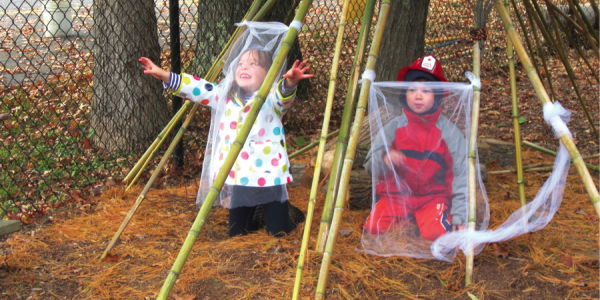 Bamboo is a unique natural material that can provide days—even months!—of exploration for preschool children.

Near the beginning of the school year, a staff member heard about free bamboo available from a neighbor. Within a few days, thirty 6- to 12-foot bamboo poles were brought to our school playground. Everyone was excited.

The children first saw the bamboo when they went outdoors for playground time. The pieces were green—some thick, some thin—and some shorter ones had leaves still attached. The first explorers chose pieces with leaves. “Look! I can reach all the way to the top of the high climber!” one child shouted to another. Some children carried their poles to a large open area and reached them up to touch tall branches, commenting, “We can reach as high as the trees!” The sticks of bamboo were like arm extensions and gave the children a sense of being tall and mighty. The leaf-covered stalks, when shaken, made a rustling sound.

“Teamwork!” the children yelled as they lifted up the bigger, leafless pieces of bamboo. Together, they carried the poles around. A few days after the bamboo’s arrival, the playground looked like a game of pick-up sticks for giants! Some of the children hopped over poles on the ground, while others tested their jumping skills by raising a pole a few inches off the ground and then jumping over it. Throughout the year, the excitement of lifting something big and toting it around never wore off.

Teachers were told about the bamboo ahead of time and were open to its possibilities for children’s play and learning. We observed the children as they explored, staying nearby in case they needed help. Staff paid close attention to make sure everyone was safe—reminding children to move carefully and helping them keep the poles’ length in mind. 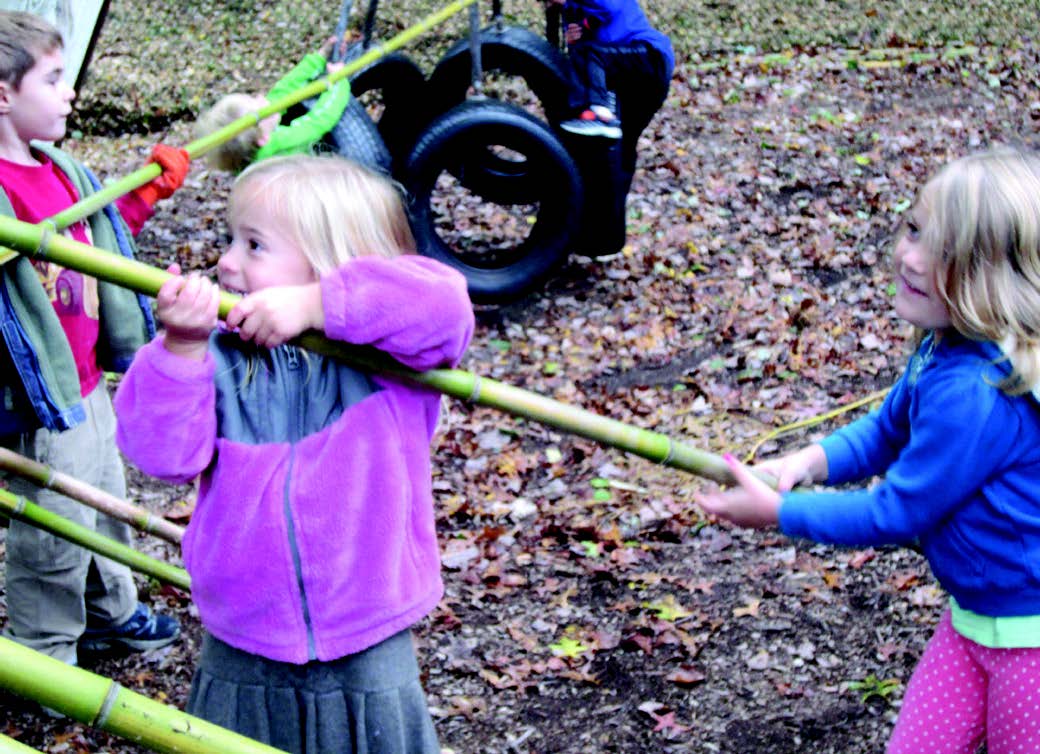 The children found many ways to use the bamboo. Some created train tracks by laying pieces end to end, in two parallel rows. They moved along inside the tracks, pulling wagons and making train noises. This group effort showed that they shared a common idea of what train tracks look like and how they are used. Other groups used the train tracks as roads, and some walked on stilts inside the bamboo lines.

Children took the bamboo stalks with leaves and planted a “beautiful forest” in the sandbox. Stalks fell over in their early attempts—the children learned that they had to plant them deeper to secure them. “You have to dig a deep hole!” they said to one another. By interacting with the environment and adapting their play to solve problems, they were able to realize their ideas successfully.

One day, the children decided to lean all of the long pieces against a tree on the playground—forming a teepee-like structure. To create a campfire setup, they added a pine needle floor and rolled in logs to sit on. The final structure was big enough for multiple children to play inside. The bamboo teepee mirrored earlier stick structures the children had created.

Teachers tied some longer poles to play structures to add visual interest and height. One became a pole to shinny up, with a teacher’s help. That was a child’s idea. During the months that followed, we introduced other materials to extend the bamboo play, including pieces of gauzy fabric, hay bales, and recycled Christmas trees. The gauzy fabric was tied to the teepee to make it look different. Children played with the hay bales and later took the bales apart to make a soft hay floor for the teepee. The children poked bamboo poles through the middle of the Christmas trees, watching as the poles came out the other side.

Children used the bamboo in many other ways—writing in the dirt, putting long pieces on top of the playhouse roof, getting stuck Frisbees out of tall trees, reaching through the fence to poke ice-crusted puddles, sitting and bouncing on big slanted pieces, pretending to saw stalks with play chain saws, making spyglasses, and tapping on logs.

As fall turned into winter, the bamboo started to look different, changing from green to light tan. Adults and children gradually became aware of this change. 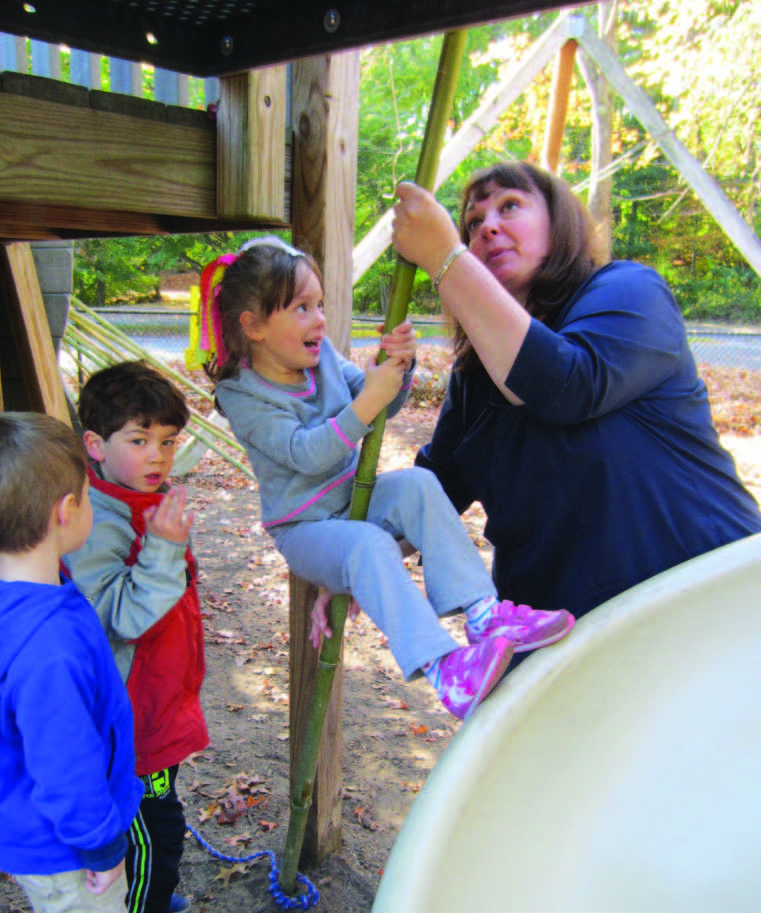 A month or so into the children’s bamboo exploration, some families had questions or concerns about the bamboo: “How are the children using it?,” “Are they being safe?” We realized that parents needed information and support to understand why we felt that playing with bamboo was important for the children.

We posted documentation that showed all the ways the children used the bamboo, and we listed the many areas of development and learning that benefited: small and large motor skills, dramatic play, creativity and inventiveness, collaboration with others, social interactions, and more. The documentation helped to clarify for families the positive qualities of bamboo as an important learning material.

About midway through the year, the children had become really familiar with the long bamboo pieces, so we asked the head of maintenance at the school to cut some of them into different lengths. Using a table saw, he had children help by holding the poles steady while he made cuts. Other children set up chairs nearby to watch. They were excited to explore the new pieces.

Some bamboo was brought into the classroom. Children sanded the ends to smooth the rough edges. One long piece became a limbo pole. Pieces with leaves were displayed as decorative elements.

Once in a while, children wielded the poles like weapons. When this happened, we reminded them to change the way they played with the bamboo. Occasionally, we had to tell children they could not use bamboo for the rest of the day.

We had them help us put it away and then join other activities. Consistently implementing this approach ended much of the bamboo weaponry play, so it never became a big problem.

The bamboo stayed on our playground all year. Over time, the pieces started to break down. Teachers took the splintery-looking pieces that were no longer safe as play material and turned them into flagpoles that they tied to the fence. On windy days, colorful cloth triangle flags waved in the breeze—yet another imaginative use of bamboo!

What Did Children Learn From Bamboo Play?

We use the Connecticut Preschool Assessment Framework as one way to assess children’s learning. The children’s explorations with bamboo connected to the following performance standards.

Photos courtesy of the author