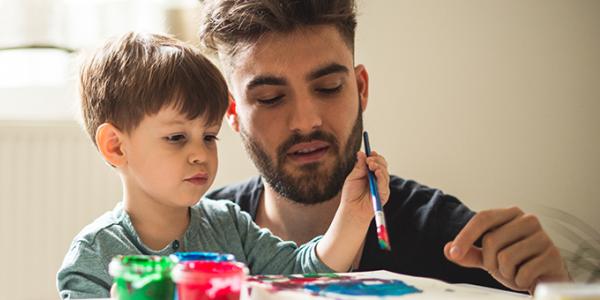 Over the next 30 years I read much of Vivian’s teacher research, her great stories, including Mollie is Three, The Boy Who Would be a Helicopter, and The Girl with the Brown Crayon. Her writing greatly influenced who I became as an educator.

And then, in 2013, I got to meet Vivian. At the age of 80 she came to Boston. She spent the day speaking to the city’s public-school preschool and kindergarten teachers: 400 teachers in the morning and 250 teachers in the afternoon. Her talks centered on her storytelling/story acting technique that was being introduced in the schools (and continues to be part of the kindergarten and 2nd grade curricula).

To help teachers picture storytelling and story acting, where a child dictates a story to an adult and then the adult helps a group of children act out the story, Vivian did demonstrations with 15 children from a local child care center that she was meeting for the first time. These sessions were magical as the children quickly forgot there was an audience and entered the space of story and play.

After saying goodbye to the children, Vivian answered questions about the method.

It was breathtaking to listen to her share deep insights into the human condition and pragmatic teaching tips in the same breath. To hear some of what she talked about, see: https://www.bpsearlylearning.org/storytelling/the-wisdom-of-vivian-paley-and-trish-lee

But what I remember most from that day took place driving Vivian back to her hotel (an honor I relished). During the afternoon session, the first question after a short break was from a person whose speech pattern was non-linear. Rambling, the questioner expressed disappointment that there was no place to put her coffee and that she worried that the children might have been nervous being in front of so many adults.  Vivian asked the questioner what she felt about the storytelling/story acting session, as it was clear the children quickly became immersed in the activity. The response was that the person had left the room and not seen the activity. I could feel my Boston Public School colleagues, the hosts of the event, sink down in their seats in embarrassment.

Indeed, part of Vivian’s genius, something that made her a great teacher researcher, was her commitment to try to understand, empathize, and be kind.

Driving through Boston Vivian brought up this interaction. She asked me if I remember the questioner and then queried, “Was I kind enough?” I explained I thought she was extremely kind, but Vivian was not convinced. She mused, “I think she wasn’t comfortable. I hope I was kind.”

And I added something else to my list of what it means to be Victor Paley: to be kind. Indeed, part of Vivian’s genius, something that made her a great teacher researcher, was her commitment to try to understand, empathize, and be kind.

Ben Mardell, PhD, is a researcher at Project Zero at the Harvard Graduate School of Education. [email protected]