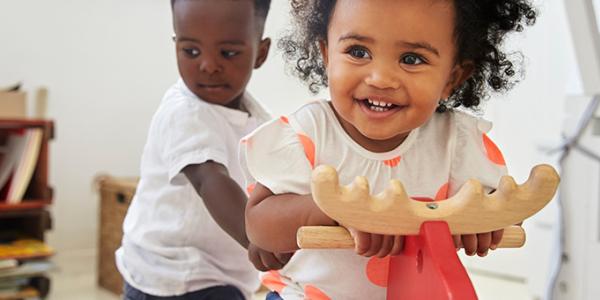 Twenty-two-month-old Shane and 27-month-old Kara are playing nap time in the dramatic play area. As their caregiver Vivian watches, Kara tells Shane they are going to play nap time and asks him to get his blanket from his cubby. Then Kara turns to Vivian and says, “Can we get some mats out, so we can play nap time?” Vivian says, “How many mats do you need?” Kara looks at Shane, then herself. She holds up two fingers and says, “Two, one for me and one for Shane.” Vivian gets two mats and asks, “Where would you like them?” Kara points to an area in the dramatic play space.

Vivian notices Zach, a quiet 2-year-old, watching closely. She says, “Zach, do you want to play the game with Kara and Shane?” Zach nods his head. Vivian says, “Kara, I think Zach is interested in playing too.” Kara says, “OK, then we need another mat!” She turns to the boys and says, “It’s our nap time, so here’s your mat, Shane, and here’s yours, Zach. I’ll get mine. Get your blanket, Zach. We are going to take a rest.”

Shane says, “But I don’t want to sleep; I want to play.” Kara says, “Shane, we’re just pretending, remember?” Shane says OK. Zach, Shane, and Kara all lie down on the mats. As they pretend to go to sleep, Zach says, “But we didn’t have a story! We always have a story before nap!” Kara says, “OK, I’ll get a story to read to you.”

The two boys sit up. Kara gets a book from the shelf, and they sit in a circle. It’s a familiar book. As Kara tells the story, she turns the pages, pretending to read. She points to the illustrations and uses them as guides to tell the story. When she is finished, she says, “Time for a nap. Let’s go.”

They lie down on their mats and pretend to sleep for about two minutes, and then Kara says, “Snack time!” They all get up and go over to the table in the dramatic play area, where they pretend to eat snacks, using wooden blocks as cookies.

What just happened here? And more important, what learning has occurred during this free-play time? Let’s break it down. First, the children choose what they want to do and how they want to do it. Kara is the obvious leader, as well as the oldest. The younger boys are happy to follow, but they contribute their thinking also. Kara shows many skills in this scenario. She is leading the play, resolving conflict, asking for help, and integrating the program’s daily routine into their play. Kara is counting and showing an understanding of one-to-one correspondence. She knows how to turn the pages of a book, point to pictures, and use language to tell a story. She is demonstrating many of the skills that professors Kathy Hirsch- Pasek and Roberta Golinkoff (2016) call the Six Cs: collaboration, communication, content, creative innovation, critical thinking, and confidence. These are the skills that children will need as adults to succeed in the 21st century, and the children in this scenario are developing them seamlessly and organically through play. Let’s explore these concepts a little further.

Collaboration can be thought of as the ability to work with others toward a shared goal. Kara, Shane, and Zach are collaborating on what to play and how to play it. While Kara may be leading the play, she is also sensitive to the needs of her two friends. For example, at Vivian’s suggestion, she easily brings Zach into their play and responds to his need for a story. This important skill— collaboration—is built and cultivated early as children begin cooperative play.

Communication can be either verbal or nonverbal, and we see both in this vignette. Vivian notices Zach’s body language as he watches the play unfold. It happens verbally when the children share their needs and ideas about the direction of the play. The children have developed this ability over time because rich interactions with caring adults have supported the brain development necessary for communication skills to emerge. The children converse, listen to each other, and know how to ask for help.

What about content? The content in this scenario is rich. There is numeracy learning unfolding as the children calculate how many mats are needed and assign one mat per child (one-to-one correspondence). Literacy skills are apparent as well, as Kara models book behaviors like storytelling, page turning, and using illustrations to support comprehension. While content is everywhere here, no one is explicitly teaching it. Through free play, the children demonstrate what they know and what they are thinking about. Vivian, their skilled teacher, watches and facilitates this content and skill development by using prompts—for example, asking how many mats they need and supporting the dramatic play arc by providing real mats for them to use.

Critical thinking is the ability to analyze and sift through information in order to make sense of it and apply it in the context of the environment. This skill involves the part of the brain that manages attention, memory, control, and flexibility—typically called executive functioning—and it’s in the front part of the brain. How do we see this aspect of development unfolding in the play scene? Zach states, “Wait, we haven’t had story time yet. We always have story time before nap.” His brain is working overtime to make that statement: he uses his memory to recall the daily routine and discover that something (a story) is missing. He then refocuses his attention to communicate this discovery to Kara. She, in turn, is flexible as well and pays attention to his suggestion, getting a storybook to read to the group. She is able to totally switch her original idea to include another’s. Isn’t that a skill that will serve her well later in school and life?

Creative innovation is what allows content and critical thinking to come together to produce something new or different. Kara shows this skill when she sets up the snack table, using blocks for cookies. Even the development of the play scheme is a result of creative innovation—Kara takes the content of nap time and incorporates it into her pretend play.

The last of the Cs, confidence, may be the most important. Without confidence, the ability to take risks and try new things is compromised. Kara has confidence in her ability to lead, think, and keep two peers interested in pretending with her. Confidence begins early, in babyhood, as infants learn that their needs, feelings, and wants are important to the caregiving adults in their lives. As young toddlers, children use adults as a secure base from which to explore and learn, and their confidence grows as they discover all they can do on their own. As Kara approaches preschool age, she still uses the trusted adults in her life when she needs help, but she also has the confidence to take charge.

How do we foster these six skills in our work with babies and their families? The most important aspect of our work is to know and understand child development. It’s within this developmental framework that we can see the 6 Cs emerging and build on them.

Reflect on the 6 Cs and write down some examples of how you have developed these abilities through your own life experiences.

Reflect on the barriers you might have encountered as you were developing the 6 Cs. How did (or could) a supportive partner have assisted you in overcoming these barriers?

Think about how you see babies using these skills—even really little babies. What is one observation you’ve seen that captures one of the 6 Cs in babyhood?

Make a checklist with the 6 Cs. Observe children of different ages, and check when you see any of these skills happening.

Discuss these skills with your colleagues and with parents, and think about how you can include the 6 C’s when planning experiences for the babies and toddlers in your care.

Remember, it’s never “just play”—it’s learning. Learning that emerges through play is deep and meaningful to children because they have shaped it themselves. Play helps children make sense of their world and gives them an opportunity to learn how to get along, think, communicate, make decisions, delay gratification, solve problems, and build confidence. The 6 Cs are skills that not only support the development of happy, productive children but also produce happy, productive adults!

Linda Gillespie, MS, is a senior training, technical assistance, and engagement specialist at ZERO to THREE. She is coauthor of Preventing Child Abuse and Neglect: Parent/Provider Partnerships in Child Care and currently supports the work of the HealthySteps Program. [email protected]