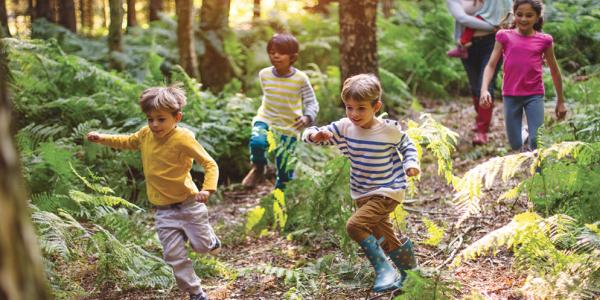 Good play environments have magical qualities that transcend the here and now, the humdrum, and the typical. They have flow qualities—qualities that take the child to other places and other times. They are permeated with awe and wonder, both in rarity and in imaginative qualities. Bad play environments are stark and immutable, controlled by adults, lacking resiliency and enchantment. Few dreams can be spun there, and few instincts can be played out. The wonders of nature, the delights of creating are all but lost for children restricted to such places.
— Joe Frost, Evolution of American Playgrounds

Throughout our careers, one of our primary goals has been to ensure that all children experience the magic of good play environments. Although some people may believe that frequent opportunities for playful learning outdoors, including explorations of nature, are merely niceties, we see them as critical for healthy whole child development. As history scholars, we know that our current efforts are grounded in a movement that began almost two centuries ago. In this column, we provide highlights from the history of playful outdoor learning and playgrounds, then turn to today’s tension between child safety and natural free play.

Recognition of the importance of outdoor play and immersion in nature for whole child development goes back to the very beginning of early childhood education. Friedrich Froebel— influential 19th century German scholar who recognized the uniqueness of childhood, created materials for playful learning, and coined the term kindergarten—emphasized the role of the garden and the importance of nature in development. He believed that humans and nature are connected at a spiritual level, and so outdoor games were an important part of his concept of kindergarten.

During the 1850s, the kindergarten movement came to the United States, bringing with it Froebel’s emphasis on the importance of nature. Margarethe Meyer Schurz, who studied with Froebel, opened the first kindergarten in America in the mid-1800s (Shapiro 1983). The idea of kindergarten spread over the next several decades, thanks largely to the efforts of Susan Blow (who is credited with opening the first public school kindergarten in 1873), John Dewey, and well- known psychologists such as Herbert Spencer and G. Stanley Hall. During the early 20th century, universities formed centers for child study, and play and outdoor play environments in kindergartens were considered to have significant educational value.

The democratic imperative of parks

In the mid to late 1800s, as the concept of kindergarten was spreading, so too was a desire for preserving natural spaces. During the 1840s, early social reformers began to realize that the unplanned growth of cities like Boston, New York, and Philadelphia had negative consequences for children. Large cities at this time were very crowded and dangerous due to heavy traffic. This led to the first major public park project in the United States: Central Park in New York City.

It became a model for urban centers across the United States for bringing play and recreational opportunities to people of all backgrounds. One of the driving forces behind the park project was the belief that for the United States to fulfill the promise of being a truly democratic country, beautiful parks and natural spaces had to be preserved for all citizens, not just the wealthy.

By the 1880s, many social reformers were concerned about the needs of children living in congested urban environments. They saw outdoor play as an important way to meet children’s needs. As a first step, German-style sandgartens were developed for young children in large urban cities. Sandgartens were simply large sand play areas placed in urban parks. These were supervised by matrons who kept children safe, as streetcars and heavy carts took over the streets (Olsen, Hudson, & Thompson 2016).

The playground movement quickly followed, emphasizing the importance of play, exercise, and vitality for the development of young people. Soon, playgrounds filled with heavy manufactured equipment dotted cities. These supervised playgrounds were intended to protect immigrant children from the hazards of playing in the streets and to help them become healthy American citizens. “The diversion and active incentive offered by playgrounds appeared to reduce the tendency for juvenile criminality among those who used them” (The Charities Review 1898, 352). Playground supervisors served as role models for the children. They were expected to be clean-shaven, have “well cared for hair,” and be “neatly dressed” (Chicago Parks Department 1906, 166). By the 1920s, including parks and playgrounds in city planning had become the norm, with widespread political support.

While growing up in the Ouachita Mountains of Arkansas during the Great Depression, I enjoyed long periods of unsupervised outdoor play, both as breaks from helping with my family’s farm and during recess at my elementary school. At school, there was no manufactured playground equipment. Play activities included building dams in the creek that ran by the school, climbing trees, and playing war in the hills.
— Joe Frost

While this democratic imperative was laudable as far as it went, it was severely limited. American playgrounds and parks were typically segregated, with many cities having no spaces for African Americans at all. Mexican Americans and Native Americans also tended to be segregated, and little provision was made for their playgrounds. These disparities continued through the civil rights movement and largely persist today, due to ongoing unequal distribution of resources (although many community groups have been working hard to increase park, playground, and garden spaces in low-income neighborhoods) (Sutterby 2017).

In addition, the ideals of the playground movement rarely reached outside large cities. There were only limited provisions for playgrounds for low-income families in rural areas. Fortunately, most children in rural areas had open spaces, farm animals, and natural materials to allow for abundant outdoor play.

Prior to the 1950s there was little concern about the safety of playground equipment. The equipment was often excessively tall—30 feet or more—and placed over hard earth, asphalt, concrete, or cinders. Equipment such as merry-go-rounds and giant strides allowed for high rates of speed but had little provision for keeping hands, feet, and even heads out of mechanical moving parts. (To see a giant stride, go to www.loc.gov/pictures/item/ggb2005014004/.)

Regulation of play equipment safety became more common starting in the 1950s. After Ralph Nader's attention-grabbing report on automobiles, Unsafe at Any Speed (1965), the report Toys That Don’t Care cast a light on how products given to children were not designed with safety in mind (Swartz 1971). Under pressure from concerned citizens, the United States Congress created the Consumer Product Safety Commission in 1973. The commission published A Handbook for Public Playground Safety (USCPSC 1981) in two volumes and has continued to make periodic revisions.

Unfortunately, as the regulations were updated and became more extensive, concern for playground safety clashed with community initiatives and children’s needs. Stringent national and state safety guidelines, standards, and regulations deemed many playgrounds that had been designed and built by community members— including children—out of compliance. Unique designs based on inexpensive materials did not fit neatly within safety standards.

Now, coinciding with the international play-in-nature movement, playground professionals are searching for the best solutions to safety and legal issues in playground development and use.

For myriad reasons, from the allure of technology to the reduction of recess time due to pressure for higher test scores, today’s children tend to be less active and less connected to nature than is optimal for healthy development. Since the early 2000s, many parents and educators have embraced the importance of dramatically changing the experience of outdoor play for children.

As a third grade student growing up in suburban Houston, I rode my bicycle to school alone. In fact, I was a “latchkey kid” throughout elementary and middle school. My sisters and I spent long summers unsupervised while both of our parents worked. Our only oversight was the handful of teenage lifeguards at the local swimming pool. These types of activities are almost unheard of today.
— John Sutterby

Professional organizations like the National Association for the Education of Young Children, the Association for Childhood Education International, the International Play Association, and the more recently formed US Play Coalition, Children in Nature Network, and the Association for the Study of Play, encourage whole-child development approaches that include free play and outdoor exploration. No Child Left Inside and Project Wild are reintroducing children to nature and outdoor activities, and the publication Free Range Kids, by Lenore Skenazy (2010), sparked major discussion about how much supervision is overkill.

Despite the ebbs and flows of movements over the last several decades, there have been consistent efforts by many educators and advocates to make lives better for children through engagement in outdoor play and nature, and with the many forms of playgrounds—all ostensibly acting within the broad scope of whole child development.

Many people around the world are collaborating to improve education and development for children in the midst of rapidly expanding cultural and technological changes. Excellent schools balance sedentary, structured, academic instruction with open-ended experiences in the world of nature, art, the humanities, and creative, productive play. The need for playful learning in nature is receiving unprecedented interest in schools and parks in response to the dramatic changes seen in children’s play opportunities, resulting in the creation of integrated natural and built playgrounds throughout the world—including, importantly, the developing world (Frost 2010).

While the lack of supervision that we and many others enjoyed as children was not without risks, playing video games for several hours a day is also a risk to children’s physical and emotional health. Integrated whole child approaches, indoor and outdoor playful learning, built and natural playgrounds, and hands-on projects must keep pointing the way to healthy and happy child development.

Nader, R. 1965. Unsafe at Any Speed: The Designed- In Dangers of the American Automobile. New York: Grossman.

Joe Frost, PhD, is the Parker Centennial Professor Emeritus at the University of Texas at Austin, where he taught for 34 years. Over the past half-century, he authored or coauthored more than 20 books on children in poverty, child development, children’s play and play environments. He is known all over the world for his research, writing, lecturing, and leadership in professional organizations.

John A. Sutterby, PhD, is an associate professor in the Department of Interdisciplinary Learning and Teaching at the University of Texas at San Antonio. His research interests include outdoor learning environments, children’s play, and social justice.