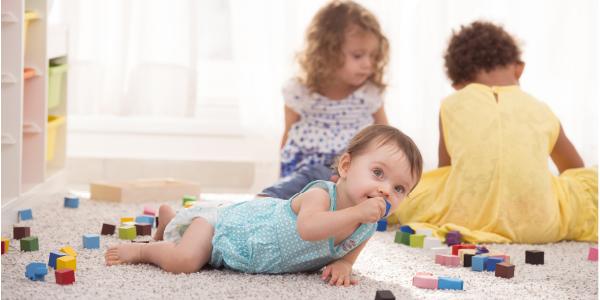 Fourteen-month-old Anya carefully stacks one cube block on top of another. She claps her hands and laughs. Sam, the lead teacher, is sitting near Anya and a few other children watching their play. When he sees Anya clapping, he catches her eye and says, “You put one block on top! You made a stack of one, two blocks!”

Nearby, 16-month-old Clayton stacks three blocks and then knocks them down. “Uh-oh,” he says. Sam turns when he hears the blocks fall and says, “Clayton, you stacked the blocks up, up, up. Then you knocked them down, down, down. BOOM!” Clayton nods his head and picks up a block to start again.

Meanwhile, 12-month-old Ashlee holds a cube block in each hand and bangs them together, laughs, and then bangs them together some more. While she plays, Sam takes two blocks and slowly stacks them on top of each other while Ashlee watches. As Sam does this, he says, “Here is one block. Now I’ll put another block on top.” Ashlee watches briefly, bangs her blocks together a few more times, and then crawls off to another activity.

While block play has been a part of children’s play since at least the 17th century (Smith 2017), there has only recently been a growing effort to understand how block play can support early learning.

Block play with babies and toddlers

Research indicates that building with blocks supports math, science, and general reasoning skills across the first four years of life (Kamii, Miyakawa, & Kato 2004; Trawick-Smith et al. 2016). While many studies focus on preschoolers (ages 3 and up), block play is an activity that can begin from infancy in developmentally appropriate ways. Like other types of play, young children move from less complex to more complex combinations of block play (Kamii, Miyakawa, & Kato 2004; Braks 2017).

Block play begins with simply holding and carrying blocks. You will often see babies and toddlers grasping blocks in their hands, flinging them down, and picking them up again. Like Ashlee in the opening vignette, infants between about 9 and 12 months old use emerging fine motor skills to grasp blocks in each hand and bang them together (Parks 2006). Around 10 to 11 months old, babies are able to put objects in a container (Parks 2006), launching the joy of fill-and-dump activities. As children explore the concept of cause and effect, knocking down block towers is often a favorite game. But in the beginning, babies and young toddlers are not yet building with blocks, so either you or a patient older child will need to stack (and restack!) the towers.

The joy of towers

More complex block play begins when children discover that blocks offer specific affordances—clues that give insight into an object’s function (Gibson 2015). Starting at about 1 year old, children begin to explore the affordance of stacking and start to recognize how an object with flat sides invites it. This indicates that children understand the spatial concept of on (Kamii, Miyakawa, & Kato 2004). Between around 1 to 2.5 years old, young toddlers who have plenty of opportunities to play with blocks will quickly develop their abilities to stack two to eight (or more) blocks (Parks 2006). Especially with a teacher like Sam to narrate and expand on the play, this type of block building helps develop children’s understanding of additional spatial concepts like above, under, and next to.

Infants can do a lot with blocks long before they start building with them. Infants can

Among toddlers who regularly engage in block play, towers soon become bridges (minimally, two blocks at the base with a third block stacked on top, spanning the two below). Bridge building tends to start around 30 months old; children often copy a bridge that an older child or adult has constructed (Parks 2006) and will begin to produce their own bridges after that.

Frequent and consistent exposure to early block play helps children develop foundational math skills related to three-dimensional shapes and construction. These experiences are important for all children, but perhaps especially important for children from under-resourced communities. One study found that by 3 years old, children from lower-income families were falling behind their peers from higher-income families in block assembly (Verdine et al. 2014).

You can set the stage for rich block exploration by providing children with a variety of different types of blocks in quantities appropriate for their ages. For example, infants may only need two or three blocks to explore, while young toddlers may need six to 10. The Infant/Toddler Environment Rating Scale: Revised Edition (Harms, Cryer, & Clifford 2006) also suggests providing accessories such as figures, animals, cars, and containers (to fill and dump) near the blocks. Recommended types of blocks include soft fabric or foam blocks; lightweight blocks of various sizes, shapes, and colors; large cardboard blocks; and plastic interlocking blocks. Older toddlers (ages 2 and up) can also benefit from unit blocks, tree blocks, and large hollow blocks. Offering a variety of block choices and rotating the different options can spark new learning.

Blocks offer children opportunities to develop not just math and problem-solving skills, but also critically important social and emotional qualities like self-control, managing frustrations, and persisting through challenges. There is also a sense of pride and a boost to self-esteem when a block tower or structure is completed. Adults play a big part in these experiences by enabling children to take their time, giving children regular opportunities to explore different types of blocks, and using rich language during block play. Together, you and the children in your classroom are constructing the foundational skills needed to succeed later on in school.

Rebecca Parlakian is the senior director of programs at ZERO TO THREE. She has developed a video series on early STEM and coauthored a recently released early math curriculum supplement. Rebecca has also coauthored five parenting and professional curricula and published articles on topics ranging from dual language development to the impact of screens on very young children. Rebecca holds a master’s degree in education and human development, with a concentration in infant-toddler special education, from the George Washington University, where she currently serves as adjunct faculty. Her most important work in child development, however, is her two children, Ella and Bennett.