Early childhood education (ECE) is in the spotlight as never before. Being in the limelight, however, has highlighted the field’s fragmentation and the variability in the quality of children’s formal early learning experiences. This reality is unlikely to change, though, unless the ECE field comes to terms with its lack of organization as a unified field of practice with defined accountabilities for a competent and responsible workforce.

A budding movement is emerging in response to this crisis of fragmentation—a drive to organize ECE as a professional field of practice unified by a common overarching purpose, defined body of knowledge and practice, shared professional identity, and internal and external accountability.1 This movement was apparent at a plenary session of the 2015 QRIS National Learning Network’s national meeting, which explored questions critical to advancing ECE as a professional field of practice.2

Stacie G. Goffin, Principal of the Goffin Strategy Group, organized the plenary session and provided its introduction. Rhian Evans Allvin, Executive Director of the National Association for the Education for Young Children, and Deb Flis, Program Quality and Accreditation Specialist, Connecticut Office of Early Childhood, were panelists, and Albert Wat, Senior Policy Analyst, Education Division, National Governors Association, was a respondent. Panelists were encouraged to voice their differing viewpoints, and we share some of those views below. We hope you’ll join us in thinking about an alternative future for ECE.

Acknowledging ECE as a Professional Field: What Needs to Happen?

Becoming a recognized profession will involve deep systems change. Because of the nature of ECE’s work, few would question that it ought to be a profession. Yet, as John Goodlad3 reminds us, “A vocation (occupation) is not a profession just because those in it choose to call it one. It must be recognized as such.”

We wanted to move beyond attempts to solve existing problems, and focus instead on creating the future we want for ECE as a professional field of practice. Toward that end, some of the questions explored during the plenary follow, along with answers provided by panelists. 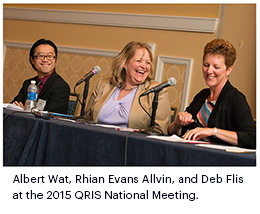 1. Should the ECE profession, like the nursing and medical professions, include specialty practices? Could this structure unite the field around a unifying knowledge base and practice expectations while also acknowledging that different roles may necessitate additional specialized expertise? If so, would one option be practice specialties based on practitioner competencies required by early learning environments with differing purposes?

Rhian contended that we know too much about the science of early learning and the impact of competent early childhood educators on children’s developmental trajectories to parcel professional competencies by workplace. For too long, she continued, we’ve derailed conversations by focusing on early learning settings rather than on the competencies required by the educator’s role. Landing solidly on the side of a shared, core knowledge base in conjunction with specializations, Deb argued that expecting all educators to possess the field’s identified core knowledge, skills, and dispositions is not only an ethical responsibility but also essential in dismantling perceptions that anyone can function as an early educator.

2. How should we address existing teaching staff unable to meet required preparation standards?

Deb and Rhian emphasized role-based specializations and linking these with specified competencies. Creating consistent competency expectations across states also was considered essential, as was the availability of different pathways toward fulfilling the profession’s requirements. Yet Deb also cautioned that this approach should not be misinterpreted as suggesting that ECE is a suitable career choice for everyone.

3. Albert challenged us by asking, Why do we have the policies we have for preparing and supporting ECE teachers? If we were to develop the ECE profession from scratch, would we have what we have today?

In response to his first question, Albert underscored that ECE policies rarely are rational or based on what children and adults need; instead, they typically reflect what the field thinks is affordable—a questionable way to develop policies for a workforce critical to children’s near- and long-term success. Thus, a resounding no was the response to his second question, accompanied by an assertion that the field needs to dismiss the notion that diversity and high standards represent competing values and put a stake in the ground about who gets to “function as an early educator.”

Our attention focuses primarily on uplifting the existing workforce, according to Albert. Developing an alternative future for ECE requires also devoting our considerable energies to developing a profession that will be attractive to those we want to be educating and caring for young children.

After decades of attempts by policy makers and civic and business leaders, the time has come to restructure ECE as a field of practice from the inside out. As stressed by Rhian, “early childhood educators need to lead this effort. They need to be the drivers of ECE’s destiny.”

Do you agree? Please join this conversation by sharing your comments below or by participating with others at ECE Pioneers For A New Era, an informal online community where we share our experiences discussing these issues.

2 Stacie Goffin provided the session introduction and served as the moderator. Her thoughts are represented in the introduction. Rhian Allvin Evans and Deb Flis were panelists, and Albert was a respondent. Differing viewpoints were encouraged. First names are used when sharing their individual views. While not inclusive of everything expressed, we hope you’ll join with us in thinking about an alternative future for ECE.

Stacie G. Goffin is principal of the Goffin Strategy Group based in Washington DC

Rhian Evans Allvin is the chief executive officer of NAEYC. She is responsible for guiding the strategic direction of the organization as well as overseeing daily operations. Before joining NAEYC, Evans Allvin was a guiding force in Arizona’s early childhood movement for more than 15 years, including serving as CEO of Arizona's First Things First.