It’s Not Too Late! 5 Ways to Get Involved with Early Ed for President 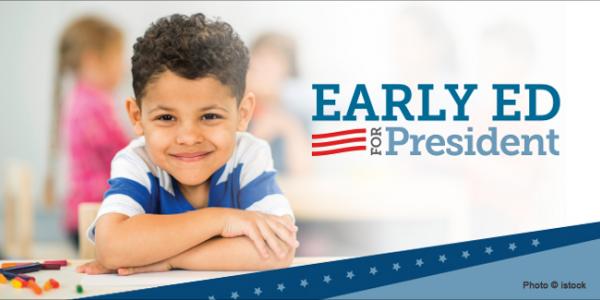 Nearly ten months ago, I was a first-time participant at the 2016 Public Policy Forum when NAEYC announced its own first-time electoral advocacy effort - the Early Ed for President campaign, designed to elevate the conversation around early childhood education and educators in the 2016 election cycle.

Since then, NAEYC members like me, and friends, Affiliates and partners all around the country have carried the Early Ed for President messages to candidates far and wide, making sure they know about the importance of early childhood education! And every one of the 105,320 (and counting!) likes and follows on social media mean our voices are growing. We’ve heard both Presidential candidates talk about child care and early learning - and we want to hear more.

With Election Day just weeks away, we need every one of you to join us. Here are five things you can do - in just five minutes per day - to join the movement and make sure early childhood education is being embraced on the road to the White House (and the state house, and the school house!)

Early Ed for President is a campaign that all candidates can support, and sharing the message is something that we can all get behind!  Go #earlyedin16!