Excerpt from The Power of Emergent Curriculum: Stories From Early Childhood Settings

A Mommy Breast and a Daddy Breast: Encountering Illness as Emergent Curriculum

A visitor to Peter Green Hall Children’s Centre’s classroom for 4- and 5-year-olds broke down in tears when she saw their teacher Bobbi-Lynn Keating with a head bald from chemotherapy. The visitor said her sister-in-law had recently died of breast cancer. In the family’s desperate need to cope with the situation, their children, 4 and 6 years old, were not involved in the process. Now one was very angry.

Adults in distress, racing to cope with unbearable difficulty, may be forgiven much. We tell the following story about the way children and adults in one classroom encountered and experienced a teacher’s cancer to share the sense of a community of care and the emotional depth that resulted. Such stories overturn stereotypes about what preschool-age children can handle.

The question of how to handle difficult news raises issues for early childhood educators. There may be as many ways to face crises as there are people facing them. We accept that the person with the diagnosis of cancer has some right to determine how it is experienced and, through our Reggio-inspired practice, that children have rights of participation. What follows seemed to be the right approach in this context, for this event, and for the children, families, and teachers involved.

After 13 years of transformation, Peter Green Hall has expanded from developmentally appropriate practice to emergent and Reggio-inspired early childhood practices with highly participatory structures and continuous collaboration among children, families, and teachers. The classroom environments and garden have evolved to build connections both to children’s and teachers’ interests and to the local community. The center supports children, teachers, and families in believing in their ideas and in their participation to realize those ideas in daily life. This sensibility promotes both democratic citizenship and the satisfaction of contributing in a productive way to collective life and happiness. How is this mission sustained when a teacher is diagnosed with cancer? What happens when a difficult issue is welcomed in a classroom for young children?

When Bobbi, at 37, was diagnosed with invasive ductal carcinoma, she said:

“I was propelled into a club of pink ribbons I wanted no part of. I was flooded with emotions—shock, fear, sadness, resentment, anger. When I thought of the children I work with, I thought surely they would notice my breast gone, my hair loss. What would I tell them? In the midst of my panic, I had a moment of clarity. Why would I treat this topic as any different from anything else? We dealt with difficult topics before—a knee surgery, and the death of a family pet. I believe children are capable, ready to engage, to learn. Gandini’s quote on the image of children is one I hold on to:

All children have preparedness, potential, curiosity, and interest in constructing their learning; in engaging in social interactions and negotiating everything that the environment brings them. (Gandini 1993, 5)

“If you believe this, it’s a no-brainer that a teacher’s experience with cancer is a topic that would be discussed, documented, researched, and experienced in the classroom.”

The center staff gathered together to discuss the situation and what to do, right after Bobbi’s diagnosis. The range of responses was as wide as we would expect, with artist and associate director, Annette Coates, articulating many of our conventional reactions—What will the parents think? Won’t it be too difficult for the children? How will we contain our own emotions if we share the news? Bobbi spoke up about her own need to keep her integrity and credibility with the children through honest communication. Many staff said they would support whatever Bobbi wished to do—to support her wishes was the strongest response they could offer. Her coteachers Justin West and Angela Silva agreed. Before talking about the situation with the children, the staff and director discussed with the families how they would share the news with the children. The parents knew the center well after several years of participation, and they supported the decision to involve the children. The director, Barbara Bigelow, said, “There was so much trust from parents, not one negative comment.”

Before Bobbi met with the children, she made a conscious decision not to use the powerful word cancer. She spoke with the children about having some diseased tissue—a lump in her breast, which had to be removed by surgery. She talked briefly about “chemo” as medicine she would need. Bobbi reported that “the children wanted to see the lump. Luckily, removing my shirt and showing my tank top with two obvious breasts was satisfactory.” When she asked the children if they understood what was happening, they made comments such as,

“Your breast will be flat.”

“You’ll only have one breast, right?”

“You’ll have a mommy breast and a daddy breast.”

In the next days, the children asked questions and shared their thoughts:

“Is your lump still there?”

“Can you grow a new breast?”

As part of the morning program each day, the center organizes small groups. Each teacher has a group of children for an extended time focused on a specific area of classroom interest. Each child chooses which group they wish to join. Bobbi’s group gave the children opportunities to discuss this issue further, and their comments offered interesting glimpses into the children’s thinking.

Their thoughts ranged from the practicalities of how the lump would be removed, as in “They will cut it and make a circle and take out the tissue” and “The doctor will look in there with a flashlight,” to larger questions of sexual identity, as in

“Do I have a breast?” asked Barry.

“But I think you will still be a girl.”

The teachers documented children’s thoughts and images and shared them with parents, who organized their own email conference to offer support and communication. Parents of children formerly at the center contacted the center again when they heard the news, and other classrooms were also involved. There is no question we were all grief stricken, yet the children’s responses helped ground us.

From The Power of Emergent Curriculum: Stories From Early Childhood Settings, by C.A. Wien. Copyright © 2014 by the National Association for the Education of Young Children. 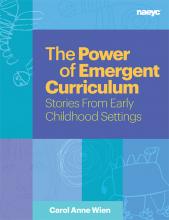