Many Languages, One Teacher: Supporting Language and Literacy Development for Dual Language Learners

In a classroom of 4-year-olds, three children are actively engaged during center-based learning. One small group constructs a tower using blocks of all sizes. This is a specific structure the group decided to make after listening to a nonfiction book—Structures, by Time-Life Books—about all sizes and types of structures. As the group builds, Mrs. Blakley observes the interactions and listens to the following dialogue:

José, Cindy, and Thomas are all at different stages of language development. José is a dual language learner (DLL) in the early stages of English language acquisition; Cindy is a DLL who speaks both Spanish and English at home; and Thomas is a native English speaker. From this interaction, Mrs. Blakley (a fictitious teacher, based on the authors’ observations of numerous practitioners in the field) learns that this small group activity provides the time, space, and materials for the children to understand and practice key vocabulary through engaging and meaningful play. This observation will guide her future decisions about targeted instruction for language development. It also sparks some essential questions about José in particular:

Mrs. Blakley’s classroom is culturally and linguistically diverse children, representing more than five different languages and ethnicities. While some of the children have been identified as DLLs, Mrs. Blakley has determined through ongoing observation and child assessments that most of the children will need focused support in language development. She needs to intentionally design lessons, activities, and interactions that capitalize on the linguistic knowledge the children bring with them while she systematically fosters English language development.

The US Census Bureau projects that by the 2030s, children whose home language is other than English will increase from roughly 22 percent to 40 percent of the school-age population. The numbers are growing even more rapidly for the preschool years due to increasing immigration and birth rates (Center for Public Education 2012). The diversity of languages and ethnicities among children entering early education programs is growing as well; for example, children who speak a language other than English in their homescomprise more than 43 percent of California’s public school enrollment (California Department of Education 2014).

Because DLLs represent a growing proportion of pre-K–12 children, and their educational achievement has consistently lagged behind their native English-speaking peers, improving the conditions of DLLs’ early schooling and their long-term educational attainment is an urgent concern to educators at all levels (Espinosa 2010). Research indicates that becoming proficient in two languages is both possible for and beneficial to young children; bilingual preschoolers show cognitive, linguistic, and social advantages (Bialystok 2008; Kuhl 2009). Two research synthesis reports, published in 2006 by the National Literacy Panel and the Center for Research on Education, Diversity, and Excellence, find that DLLs benefit from instruction that focuses on decoding and comprehension in English.The reports also conclude that a strong home-language base makes it easier to learn English, and that young children can learn two languages as naturally as learning one (August & Shanahan 2006; Castro, Ayankoya, & Kasprzak 2011; Genesee 2010).

However, unless teachers and families make an effort to support both the home language and English, young DLLs can easily lose the ability to speak and understand their home language or lose the balance between the two languages (Castro, Ayankoya, & Kasprzak 2011; Puig 2010). If young children lose the language of their home, they will never experience the many advantages of becoming fully bilingual. They might find communicating with elder family members difficult and feel less connected to their family traditions and heritage. This disconnect can lead to emotional and self-esteem concerns as DLLs approach adolescence (Wong Fillmore 1991).

For all these reasons, supporting and encouraging young children’s dual language learning makes sense and is crucial to their long-term success.

From Spotlight on Young Children: Supporting Dual Language Learners, edited by M. Dombrink-Green and H. Bohart with Karen Nemeth. Copyright © 2015 by the National Association for the Education of Young Children. 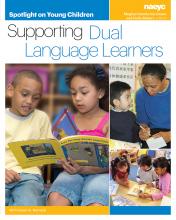