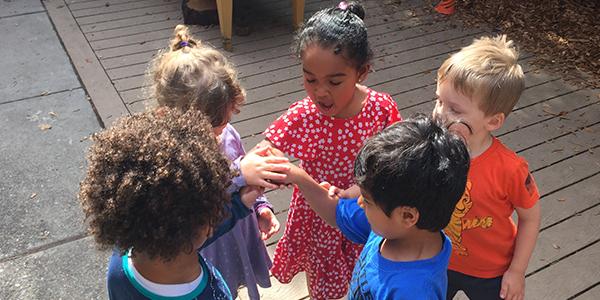 Read the following story and teacher reflections from Matthew Lawrence, and use the Reflective Questions below to deepen your thinking and shape your teaching practices.

“Everybody, put your hands in!” Ari proclaims during playtime with her friends. Other children join Ari, making a small circle and extending their arms so their fingers touch in the center. “We are Power Rangers!” announces Ari. She directs everyone to throw their hands up in the air. From there, each child breaks off into his or her own realm, pretending to fight off an enemy.

Excited by what has just happened, Maude says, “Let’s do that again!” Everyone gathers together, puts their hands in the circle, throws their arms wildly in the air, and repeats the chant: “We are Power Rangers!”

The children’s level of excitement grows each time they repeat the established steps of this invented superhero game. They become so excited that they forget to be aware of each other’s personal body space. As the teacher, I begin to worry that the game may become too violent and that someone might get hurt. I question whether the children are capable of being respectful and safe while involved in this energetic play. In this conflicted moment, I quickly propose that the group take their game outside. 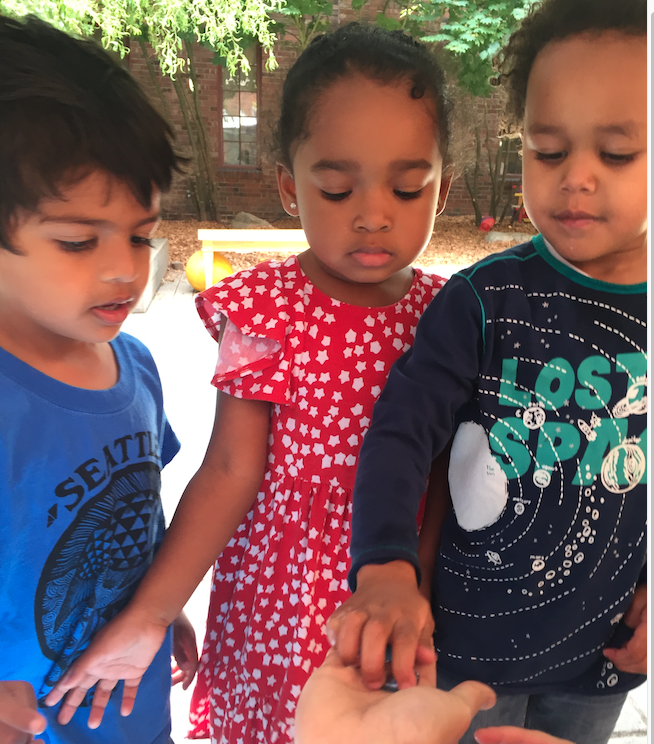 Even though there was more space outside to play their Power Rangers game, my worries about the children respecting each other’s space lingered. I asked myself, What do I know about these Power Rangers characters? How can I honor the children’s ideas while keeping them safe? After thinking it through, I asked the children what they knew about the Power Rangers. The children immediately responded, “They help people.” Interpreting this response as an invitation, I joined the game as a character who needed help.

I hid a bunch of “power gems” throughout the play yard and suggested that each child use a special power on a mission to help me by finding the gems. Maude had the power to freeze enemies, Rowen could run with super speed, Ari had superhuman strength, Kailash could fly, and Peter had laser vision.

Once they had accepted my offerings for their game, I noticed how the children immediately became more aware of each other and were able to build on ideas together. In addition, they maintained their strong social connection while becoming more aware of each other’s personal space. When they gathered again in a circle to put their hands together, they were thoughtful about giving each other enough room. This was a great reminder that when a teacher accepts and honors children’s ideas, he can take actions that help their play grow, guiding them to see each other and remain safe during play.

I asked the children what they knew about the Power Rangers. The children immediately responded, “They help people.”

I was most delighted by the strong connection the children had when they put their hands together and shouted, “We are Power Rangers!” Many of my joyful memories of childhood play consist of moments like this. There is something unique and powerful about the way that joyfully chanting together can bring strong feelings of connection, unity, and support to a group. “Wow! This looks like the best part of your game,” I said. Voicing my recogni 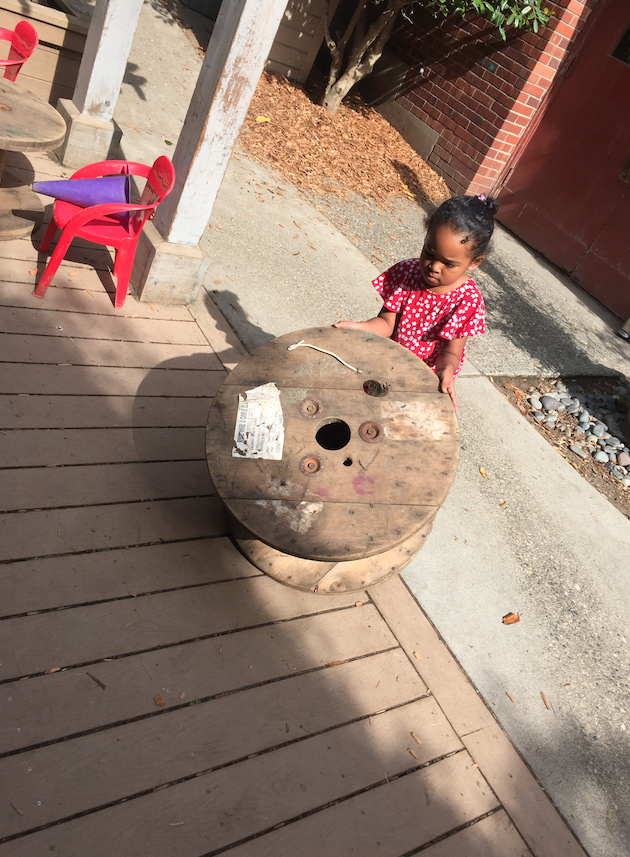 tion of the children’s joy from chanting together enabled them to see it as a strength. It was remarkable to see the children’s competencies shine as they began to understand and be aware of each other while engaged in big body play.

It also fascinated me that the children were so eager to accept my contributions to their game. Many teachers are reluctant to join in children’s games, thinking they will disrupt children’s initiative and creativity. But I noticed that when I joined in as a partner and fellow dramatic player, the children felt valued and respected, shared in creative ideas, and expanded the play.

Often, my coworkers and the children’s families express worry about the commercialism and violence in children’s superhero games like Power Rangers. I believe that occasionally our adult opinions overshadow the children’s needs and the possibilities for children’s learning through acting as powerful characters.

As a trained actor, I have learned to look at characters from multiple angles and understand that their characteristics often reflect strengths and challenges that all of us, including children, can relate to. I invite conversations with other adults to think more deeply about why children have strong connections to these commercial characters and what our concerns are about allowing children to use them in dramatic play. 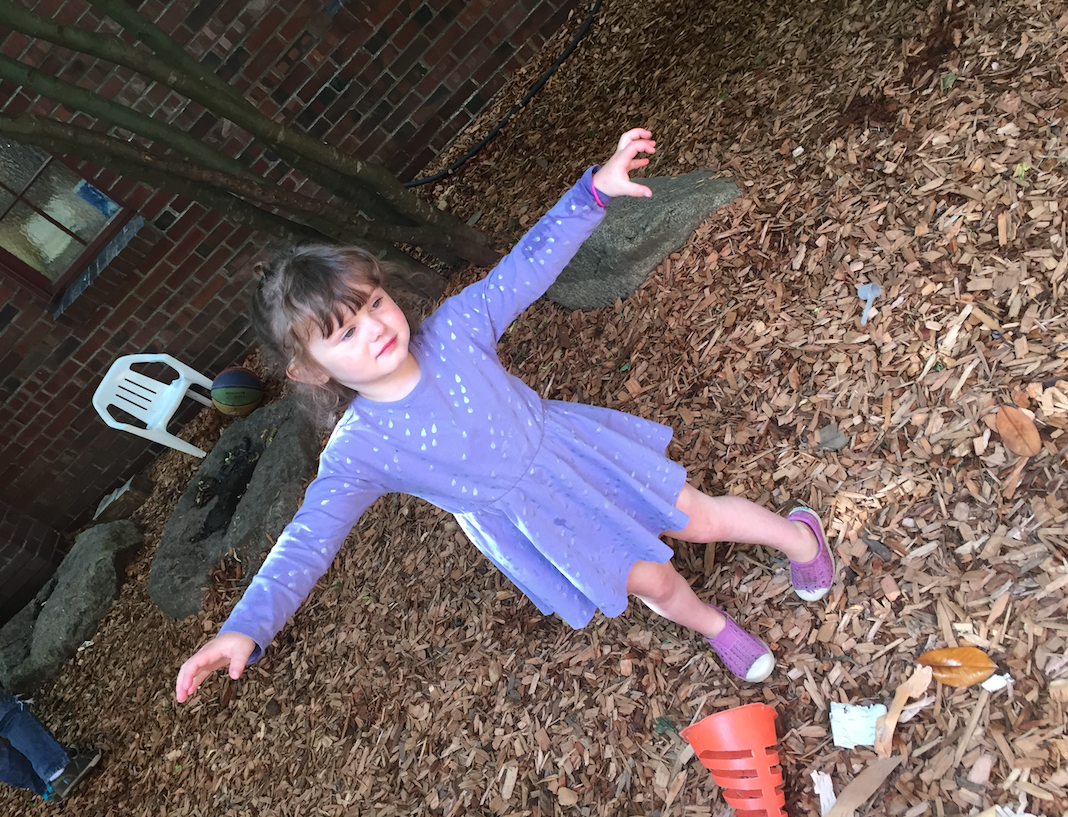 This involves looking for a character’s intentions—what the character wants and why that motivates the character’s choices and actions. Through conversations with children, I usually discover that the themes they find so compelling revolve around characters’ strengths. When acting as Power Rangers, the children identified with feeling powerful and related to the Power Rangers’ intention to fight—not to be violent, but to protect, help, and save their friends. Seeing the children’s motivation to help in this kind of play alleviated my concerns.

I remember the feelings of exhilaration I had as a child when pretending to be a powerful character. Acting out those exciting dramas allowed me to see different perspectives, helping me overcome my fears and develop more confidence in my daily life. These experiences motivated me to become an actor, and they continue to help me as a teacher. I can easily recognize and support children in their love of certain commercial characters because I understand that this type of play is a thrilling avenue for learning and development.

Use the following questions from the Thinking Lens to reflect alone or with a colleague.

Consider opportunities and possibilities for next steps

Deb Curtis has spent the past 40 years working with children and teachers in early childhood programs. She developed the Thinking Lens with Margie Carter and Ann Pelo.