In October, many preschool teachers introduce topics such as the change of season or harvest time, and pumpkins tend to make their way into the classroom curriculum. Young children savor sensory experiences like feeling pumpkin pulp and smelling freshly cut pumpkin. The group may discuss the pumpkin life cycle, grow pumpkin vines, read pumpkin-themed books, and engage in a range of pumpkin learning activities, from counting seeds to roasting them. Yet, there is an important part of the pumpkin story that is often not explored—what happens to pumpkins when they decompose, and why is decay important?

Before circle time, it is independent reading, and 4-year-old Amanda settles into a chair with an already familiar book, Do You Know Which Ones Will Grow? She begins to “read” this fun, rhyming, predictable book aloud, manipulating the fold-down pages and correctly identifying which things will grow and which will not. Her teacher has read many stories to clarify the concepts of living and nonliving things and to help the children understand that when living things die, they begin to decompose.

On a summer day, three preschool teachers and an early education consultant met to draft a unit on decay. They discussed

The three preschool teachers, working in different programs, in collaboration with the consultant, used this planning session to design a curriculum specific to their own group of children and families. As the projects developed, email exchanges helped the educators keep in touch and learn more about decay—expanding learning opportunities for all.

In September, before the pumpkin study began, a preschool teacher in the first classroom at a Head Start and state early intervention collaborative program sat with each child in her classroom and asked questions like these. She received a range of replies, from “Dinosaurs are nonliving because they are extinct, but they were living” to “There are big rocks and baby rocks, so they must be alive.” This helped her assess how much the children understood about the topic of living and nonliving things. The children documented their decomposition project observations in “My Pumpkin Study” journals. The journals included pre- and post-study questions and answers, learning goals for the study, and information about the scientific method. They also shared their journals with families.

Activities to learn about what is living and nonliving included 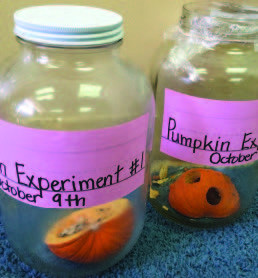 It is a beautiful fall day, and the children are gathered around an apple tree in the yard. They are examining apples that have fallen to the ground, and one child comments, “It

died.” The teacher replies, “Yes, the apple is dead because living things die. And after an apple dies, what does it start to do?” After a brief pause, she continues, “It rots. Look at all of the things that are happening to it.” Another child adds, “Like the pumpkin,” making a connection to the ongoing classroom investigations.

Will pumpkins decay more quickly indoors or outdoors? Which pumpkin half will decay more quickly, the one with holes poked in it or the one with no holes? What will happen if we plant the pumpkin seeds? The children considered these questions; made predictions; participated in investigations, observations, and data collection; and discussed conclusions.

As the educators compared stories, they discussed pumpkin decay mysteries: “It is Day 30, and the cut-up pumpkin in our sealed container is not really decaying.” In another classroom: “We cut a small pumpkin in half, poked holes in one side, then put each half in a separate jar. The half with holes turned white—our ‘ghost’ pumpkin—and the other half is covered in black rot!”

Contacting the Cooperative Extension of the University of Maine, the teachers exchanged emails with a mycologist, a person who studies fungi. The mycologist shared considerations that impact the growth of molds and other fungi:

This information was fascinating to the teachers, and it helped them better explain and discuss with the children what they were observing as the pumpkins decomposed.

“Look! The spider is spinning a web in our pumpkin.” In the second classroom, in a public preschool, children helped their teacher cut a hollowed-out pumpkin into square pieces, and they put the pieces in a container with a lid. A second hollowed-out pumpkin was placed on a tray next to the container for observation. After a few weeks, the second pumpkin started to grow white mold. The children thought the mold was a spiderweb because they had seen a spider in the classroom the week before.

To help children test this theory, teachers set up a new experiment. Pumpkin chunks were placed in a container the children had inspected and declared to be spider proof. The group also examined picture books, such as Rotten Pumpkin: A Rotten Tale in 15 Voices, which shows photographs of a decaying pumpkin and different decomposers—including mold. These various classroom investigations and discussions provided children with new information and experiences designed to help them review their original theories and develop new ones. 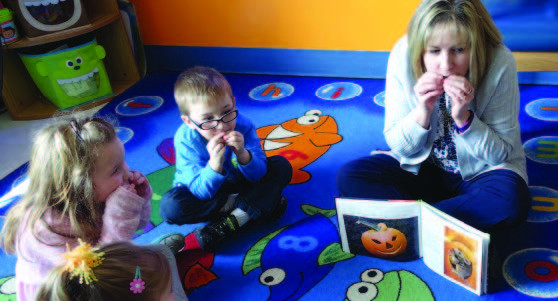 In the third classroom, also a public pre-K, 4-year-old Lindsay is eating cheese crackers she brought for snack. She holds one up and asks, “Can we put this in the Decay Museum?” To involve families in their study, the teacher asked them to send in food items the children could watch decompose in the classroom. Fruits, vegetables, a slice of forgotten birthday cake, cheese, bread—each item was enclosed in a jar or a sealed plastic bag, creating exhibits the children could observe daily.

Children and their family members became more curious about how food decays, continuing even months later to send in food they wondered about and wanted to observe. One father requested that something already rotting be placed next to a new food item, to see if that would cause the new item to rot faster. Another family helped their child start his own decay museum at home!

Children made observational drawings and predictions about their food items. They used scientific tools for closer observation. In addition to making magnifying lenses available in the science center, the teacher connected a tablet or smartphone to an LCD projector, using the camera’s zoom feature so children could see much finer details. Another day, children took a closer look at decomposers found in decaying matter in a worm bin, using a borrowed mini digital microscope.

The important work of decomposers 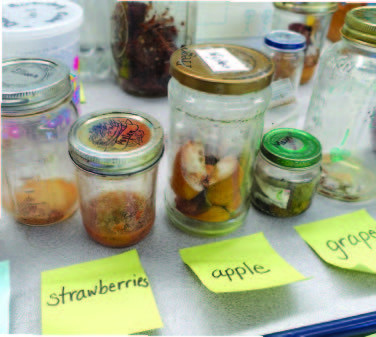 “It’s super flat—flat as a pancake!”

“It has decay stuck on it, and spots.”

A photo of the orange pumpkins placed on an observation shelf outside the classroom window in October provided a visual reminder of the pumpkins’ original condition, as the children described what was left of them in early March. What happened to the pumpkins? The changes inspired rich conversation.

After months of observations and investigations, many children were involved in the discussion. The teacher wrote key vocabulary and concepts on the board: pumpkins, decay, decomposing, rotting, food, mold, bugs, nutrients, dead things rot and help living things grow. Together, they reviewed photos of decomposers in a book, acting out the role of the mouse nibbling, or the slug scraping the pumpkin with its sharp tongue. Later that morning, they danced while watching a short music video about decay. The video link was shared with families for home viewing, with a request to become outdoor “decay detectives,” looking for rotting stumps and leaves and emailing photos to the teacher to share the next day.

Apples, pumpkins, and overlooked fridge food; time; online activity suggestions for studying decomposition—the ingredients for engaging science explorations are readily available. Studies can expand in new directions as children become curious about earthworms, landfills, and more. Why is this important? As children in these classrooms discovered, when living things die, decomposers help them decay, release nutrients into the soil, and help new plants to grow—and that’s the rotten truth!

For more information and resources to start your own study of decay, visit https://sites.google.com/site/discoveringdecay/.

Victoria Grotton is Maine’s 2014 Penobscot County Teacher of the Year and a pre-K teacher at Glenburn Elementary School, in Maine.

Suzen Polk-Hoffses is a pre-K teacher at Milbridge Elementary School, in Maine.