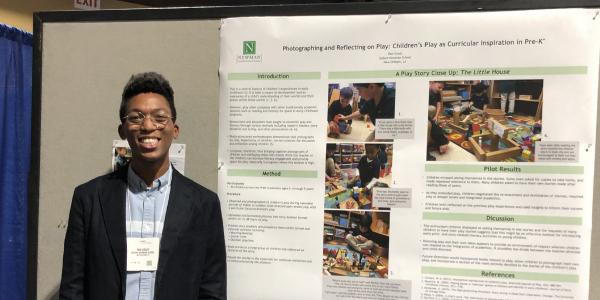 Ron Grady lights up when he talks about his experiences in the classroom! It is impossible to miss his enthusiasm about the energy in the classroom and how it inspired him to get connected to the community in early childhood education. As he was just getting an understanding of the profession, Ron remembers how he found a vibrant support system while attending a NAEYC conference. Throughout his career, he has found the active conversations in the NAEYC member community an integral part of staying connected to the field. In these unimaginable times, I am grateful for HELLO and how it has been a place of active conversation, shared resources, and connections for our members and for early childhood education worldwide.
—Michelle Kang

To hear more of Ron’s story, check out his video interview with Michelle:

Ron Grady’s career in early childhood education has taken many different forms, with each new venture more creative and adaptable than the last. As an early childhood educator and founder of the online curriculum resource Childology, Ron has an interest in incorporating the tenets of child psychology into early learning programs, and is passionate about innovating the field even further. As an undergraduate student at Stanford, he helped to conduct studies at the university lab school and in laboratory settings. “I found myself increasingly drawn to the life occurring in the classrooms,” he says. “Exciting, dynamic, and so real!”

Ron went on to work as a mentor-teacher and program developer at two schools in New Orleans, both of which focused on play as an integral part of early childhood education. His experiences with other educators throughout his career have also influenced his outlook on early childhood education, and how he approaches working with young children. “I had the privilege of working alongside a group of educators who were not only kind, respectful, and devoted to the children—what’s more, they revered them as experts in their own lives and experiences,” Ron says. He learned practices that he carries with him today, including the idea that teachers can and should experience things alongside the children they are teaching, with teachers being “coexplorers.” The opportunity to learn new things is ever present, even as an educator. In being a coexplorer with his students and experiencing new things alongside them, Ron notes that, “It informed my empathy and also my enthusiasm.”

After working in the field as an educator, and with the experiences he had as a researcher, Ron set off on a new endeavor: creating his own set of resources about early childhood education for families and educators—Childology. “After leaving work due to COVID, I began engaging with communities of parents who were working in various ways to help their children learn at home. After observing, having conversations, and considering my own interests, I decided to devote myself full-time to developing resources for and consulting with families,” Ron says.

Childology is an online resource for families and caregivers to aid their children’s learning and development at home. “It’s available to anyone who wants it, and I see it becoming a virtual community of practice,” Ron says.

Community and the value of relationships between people working toward common goals, especially in this new virtual landscape, is another important lesson Ron has learned: “Working in my current position has taught me the value of community and the importance of embracing the changing landscape of what community looks like. When you create a space—virtual, in-person, or hybridized—where a community can take root, people appreciate it and will invest themselves with sincerity.”

Ron encourages the idea that children can guide their own learning just as much as their teachers can. “A child knows what they’re doing, and our roles as educators and caregivers is to provide them space to develop what they’re already doing, to facilitate it, and to be patient with them,” he says. Ron knows how capable children are, and his advice to educators (and to families working alongside educators) is to “trust your children, and don’t be afraid to listen. Be an apprentice to your child. They will teach you so much more than we can ever hope to teach them. Just listen, and observe.”

SHARE YOUR STORY. Answer a few questions to tell us about your work with young children and what NAEYC membership means to you.

NOMINATE A MEMBER. Share why a NAEYC member you know should be recognized for their work with young children.