Every Color on the Canvas: Using Art to Explore Preschoolers' Understanding of Differences 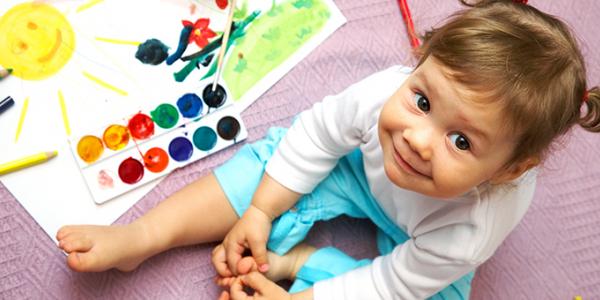 “I’m not going to paint with that.” Five-year-old Garrett, his small brow furrowing as he crosses his arms in front of him, shakes his head at the container of yellow paint that Mr. Abreu, the student educator, offers him. Mr. Abreu does not notice any difference in consistency between the yellow paint and the other containers of paint nearby. He provides Garrett an opening to talk more about the paint. “Garrett, I’m wondering what you’re thinking about the paint. What are your thoughts right now?” Garrett, crossing his arms more tightly around his body, states emphatically, “Yellow is a girl’s color.”

Consistent with developmentally appropriate practice, teachers in this combined preschool and kindergarten classroom treated culturally constructed notions of gender as a fluid concept rather than a dichotomy (Weedon 1997). Activities or ideas were not gender specific but rather experiences open to everyone in the classroom. The collaborative teaching team—which consisted of the lead teacher supervising the practicum experience, student educators (one of whom is the second author), and the professor teaching the seminar portion of the course (first author)—invited all children to take part in the planned learning experiences or available choices.

However, maintaining a gender-neutral learning environment can be challenging. Children—informed by experiences in their homes, communities, and society as a whole—bring their own ideas about gender-appropriate materials and activities to the classroom (Klein et al. 2007). In other words, gender is a socially constructed notion for children, the realization of which prompted the teaching team to begin observing the children’s perceptions of gender through planned learning experiences and to guide their experiences to address any misconceptions in developmentally appropriate ways.

When the class began its project approach investigation, “How Do We Paint?,” the collaborative teaching team had not identified the exploration of gender issues as a goal. Rather, the goal was to learn to value and appreciate one another’s work. But as the painting project progressed, issues of gender and gender norms became prevalent. Because the project approach offers opportunities for children to answer their own questions, solve problems, and address misconceptions (Katz & Chard 2000; Helm & Katz 2011), it quickly became apparent to the teaching team that this painting project presented a chance to explore ideas about gender norms.

As the project began, the children’s appreciation of art in the classroom was focused on what is beautiful or what is real. These misconceptions were noted in children’s comments such as “My painting doesn’t look like anything” and “Your painting is ugly.” Yet we know children begin their art explorations with materials—discovering color, texture, and even movement—through conversations and exchanges with other children and adults, and that these social interactions can be a way to address any misconceptions they might have. As the educators watched the children in the classroom, they observed this aspect of children’s early art exploration and noticed that the children had strong viewpoints about certain colors being boys’ colors or girls’ colors. They also had strong opinions about each other’s drawings: if they couldn’t tell what the image was, then it was bad or ugly; this, despite the fact that the teachers intended the opportunities in the art area to offer exploration of the tools and materials. The goal was for them to investigate the process, or to experience art rather than focus on the production of art.

Consistent with Fox and Schirrmacher (2015), who suggest young children move from a process-oriented to a product-oriented approach when engaging with art materials, the purpose of the activities in the art center was to enable children to see what they could do rather than what they could produce. Early in their development, one would not expect preschoolers to create polished or readily identifiable products (Thompson 2005). In general, when children first explore art their creations are frequently nonrepresentational—that is, they do not attempt to make a person or an object. Children often don’t begin making representational art until they are between the ages of 5 and 8 (Thompson 2005).

Children—informed by experiences in their homes, communities, and society as a whole—bring their own ideas about gender-appropriate materials and activities to the classroom.

Painting, like drawing, is something that children create themselves, so it is a very personal act for them to engage in. As such, the collaborative teaching team wanted to address the issues of process and experience of art, as well as the ideas of individuality and originality. “Originality, difference, and variety are to be valued” (Katz & Chard 2000, 155). Katz and Chard (2000) suggest that these differences are explored through discussions of children’s drawings and, in our case, paintings. The teaching team developed activities to address the children’s misconceptions and stereotypes. Some activities were direct, such as children critiquing each other’s drawings; others were indirect, such as teachers offering only “ugly” colors.

One way the teaching team addressed the children’s misconceptions about gender was to invite a visiting expert to the classroom. Marybelle, a child’s grandmother, is an art teacher whose area of expertise is abstract painting. The teachers specifically chose her because she is a female painter who uses colors the children identified as ugly. Educators were hoping that by sharing her paintings, Marybelle would expand the children’s ideas of “beautiful.” When Marybelle came into the classroom she told the children and the teachers that she paints abstract art, and explained that abstract art is “when you create something that does not have to look like something in real life.” That idea really sparked the children’s interest. When critiquing art before Marybelle’s visit, the children often made comments such as, “Your drawing isn’t a real tree because it doesn’t look like a real tree.” After Marybelle’s visit, however, the children began to proudly call their work abstract art. Her visit also enabled the children’s understanding of each other’s artwork, expressed through conversations they had with one another about art technique, the use of color to represent mood, and feelings portrayed through their art. This event was a pivotal point in developing the children’s appreciation of each other’s work and the different ways they approached their art.

Although prior to her visit the children generated a list of questions for Marybelle, the children also had the opportunity to ask additional questions as she showed them how she paints. The children noticed that Marybelle uses a lot of color in her paintings, and one child asked Marybelle, “Why do you use so much color?” Marybelle responded that she just loves color. She said that she likes to use all kinds of colors—brown, tan, purple, red—and her art reflected that. Some were colors the children had previously thought of as ugly or “boy colors.” Marybelle explained that as a professional artist, she uses all colors, not just colors that were “for a girl.” By explaining this and discussing how she chooses colors, she helped the children “identify and revise misconceptions” (Katz & Chard 2000, 72), showing the children that all colors can be used and that there are no colors that are available only to boys or only to girls. As a result of this conversation, purple, once a color used only by girls, began to show up in boys’ paintings. Similarly, girls began using brown in their art.

Marybelle explained that there are many different kinds of paint. She also answered a question about a red screen tool, something the children had been curious about since the beginning of the investigation. Marybelle’s visit offered an opportunity for this exploration. Talking about the tool, which is used for spatter paint, prompted Marybelle to discuss the painter Jackson Pollock. The children’s discovery of Pollock led to one of our most significant explorations: using black and other dark colors to make art.

After Marybelle’s visit, the class watched a video about Jackson Pollock. The video described who he was, what he painted, and how he painted. The children and teachers watched him spatter and drip paint, and saw a slideshow of his paintings. During the slideshow, the children noticed that Pollock used the color black in most of his paintings. The team planned learning experiences in which the children could spatter and drip paint in the style of Pollock, using the darker colors they had seen in Pollock’s paintings, such as black, brown, and blue. Teachers encouraged children to explore the painting technique and to use the dark colors in a way that was beautiful to them. They observed that children came to the planned learning experience and engaged in the art activity without commenting that the colors were ugly or only for boys or for girls.

Ms. Martinez and Mr. Abreu set out the paints in the art area, deliberately including all of the colors available, as was planned during the collaborative team meeting the previous afternoon. Four-year-old Clara, who up to this point had painted with only purple or pink, chooses to paint with brown. Clara proclaims, “My painting is abstract this time.” Garrett, age 5—who had previously commented that “yellow is a girl’s color”—paints in purple. He turns to Ms. Martinez and asks, “Is there glitter? My painting needs glitter, I think.” The teachers later compare their observation notes and find that other children’s comments were consistent with Clara’s, and that dialogue focused on the style of art and the colors rather than commentary on its worth.

One of the ways teachers assessed the children’s growth in appreciating differences was during the project’s culminating activity. A final event is typical for the project approach, and as such the children held an art show for their families to demonstrate their knowledge not only of art, but also of diversity. In preparation for the art show, children chose a style from among the different art forms investigated during the project—including still life, abstract, spatter, and drip painting—and painted their own canvas in that form. At the show, the children shared what they had learned during the project.

The children’s final paintings were a reflection of their growth in appreciating diversity through artwork. Many children chose abstract art, and the pride in their work was evident on their faces as they shared the pieces with their families. The colors they chose were not based on “girl colors” or “boy colors,” and nobody commented when a boy chose purple or a girl chose brown. The children were able to discuss one another’s artwork by referring to colors as being hot or cold and happy or sad, rather than simply using gender to describe them. They were also able to explain to the families why their paintings were abstract or still life. Rather than feeling embarrassed about their art (in cases where it didn’t seem representational), the children’s demeanor indicated they felt a sense of pride that they had accomplished the goal of making a specific type of art.