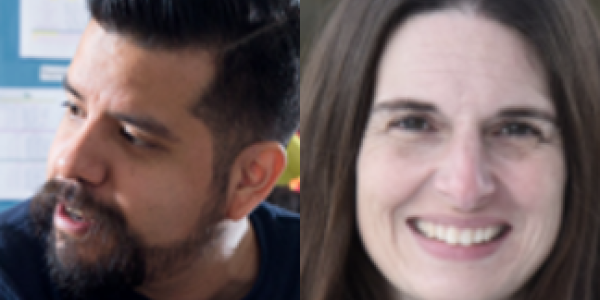 Being a NAEYC member connects you to a community. I love hearing how members get connected to each other through their affiliates and through NAEYC’s Interest Forums. It is also exciting to learn when members find our resources to support their role as part of the early childhood education profession. For Danny Vasquez and Corrine Hendrickson, the NAEYC community and our resources have supported their efforts to promote the best possible education and care for young children. I am inspired by Danny’s use of our publications to connect with families and learn more about how to best support the children he serves. And it is invigorating to read about how NAEYC gatherings such as the virtual Public Policy Forum have helped Corrine advocate for early childhood education in her state. As we look to connect with each other in the months ahead, I hope you see NAEYC as a community where you belong and that will be here to support you wherever you are impacting the profession! 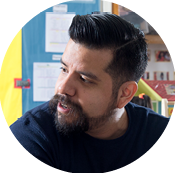 Danny Vasquez’s journey so far as a teacher has been a winding but rewarding one. As a high school student, he was a summer camp counselor at the elementary school he attended as a child. This led to a position as kindergarten teacher’s aide at that same school when he graduated. “That first year of working in the field, I knew I wanted to work in early education,” he says. Aside from a brief period away, he has remained in the field for more than 17 years. He is currently the lead pre-K teacher at Annandale Christian Community for Action (ACCA) Child Development Center in Annandale, Virginia.

Over the years, Danny has learned many valuable takeaways not only about children but also about himself. He has an especially strong connection with children who benefit from more individualized supports, including children with challenging behaviors and children with disabilities or delays. He attributes the connection to “building that relationship, figuring out the best way I can communicate with them, and helping them and guiding them.”

One situation in particular stands out for him. “There was one child who, as much as I would try to persist and help, we would go in a positive direction but then revert back. It was like a puzzle almost.” Even by the end of the school year, Danny felt he had not built a strong enough relationship with the child to be able to fully help him thrive. He realized that he did not always have the right tools for every child.

Coming to that realization helped Danny understand that he may need to seek out resources and recommendations from others; he did not have to figure it out on his own. He then reached out to the child’s next teacher with the new knowledge he had gathered. The teacher built this important information into their formal and informal planning and supports for the child. Though it might not have seemed like it initially, for Danny “coming to that realization was a success for me.”

One of the most valuable lessons for Danny is to listen. “Listen to the children. They will tell you what they need.” It is possible for adults to follow children’s lead, something that differs from Danny’s experience in school. He emphasizes the importance of “understanding what that lack of autonomy feels like for a child and giving them the opportunity to express themselves and to listen to what they have to say.”

Alongside lessons learned in the classroom, Danny has looked to NAEYC research-based resources, such as issues of Teaching Young Children and books like Trauma and Young Children: Teaching Strategies to Support and Empower, to inform his approach to listening, encouraging children’s agency, and being responsive to each child. “When the book on children and trauma came out, I actually reached out to one of the authors and I interviewed them to learn more.” For Danny, the book was able to approach a complex topic in a way that was practical and accessible. It helped give him both new tools to discuss the topic and the confidence to do so. “NAEYC’s publications are very relatable and grounded in practice. They have created a big impact for me and my colleagues.”

Danny looks to many things to bolster his own practice—NAEYC resources, the children who greet him with smiles each day, and of course, his fellow teachers. He acknowledges how difficult it can be to keep pushing forward with so many obstacles in the field and profession, but he gains, and hopes to give, strength to all other teachers striving for quality education. “I know it’s hard, and I just want to say that I see you and I support you.” Early childhood education is lucky to have Danny as both a thoughtful professional and an ardent supporter. 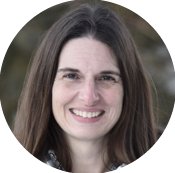 Corrine Hendrickson was all too familiar with the struggle to find quality, affordable child care when she decided to become a family home care provider in 2007. She had a 10-month-old child at the time, and a few of her friends were expecting babies too. They realized that “finding care to fit our needs was difficult.” So Corrine offered “to quit my job in another field and start an early learning program for my friends.”

With a degree in education and a license to teach pre-K through grade six, Corrine set out to address this gap. In doing so, she became even more invested in the early childhood education needs of her immediate circle and of their local community. In addition to being scarce, Corrine observed that early learning programs and services that did exist were often overlooked and underfunded. For example, her advocacy work began with a focus on children with disabilities; she worked with a colleague and her state senator to bring attention to and to gain funding and other supports to offer inclusive learning experiences for each child. Through these early experiences, she learned that her voice and actions can lead to positive results for children, families, and educators.

Now, she owns and operates her program each weekday and participates in advocacy work and professional development during evenings and the weekend. “I put in about 30 additional hours per week on the business and advocacy side of early childhood education,” she says.

Many of Corrine’s advocacy efforts came into sharper focus in 2020. Along with fellow advocates, she cofounded the Wisconsin Early Childhood Action Needed initiative “to create a network of early childhood educators in a variety of settings, parents, other business owners, and other interested community members.” The organization strives to inform its 500 statewide members of important policy updates. Another goal is to highlight other aspects of policymaking and to share specific steps or strategies to engage in advocacy. “We have held trainings on the state budget process, meetings with a variety of elected officials, and trainings on voting education,” says Corrine. The cofounders have also discussed with their state senator and assembly representative the need for “a legislative council to convene to study the child care crisis in our state and create legislation to support accessibility and affordability of care along with increasing wages of the workforce.”

In her early days as both a provider and advocate, Corrine joined NAEYC in conjunction with joining the Wisconsin Family Child Care Association. Especially since the onset of the pandemic, she has seen just how beneficial membership is. “NAEYC responded quickly and forcefully to advocate for our field. The pandemic was a crucial time to act, and NAEYC did a fantastic job of responding.” She felt this was especially the case because of the timely and ongoing surveys and reports by NAEYC.

Corrine appreciated the opportunities that arose out of such a difficult time, especially as more people have come to realize and acknowledge the long-standing problems for the field that were only intensified by the pandemic. “NAEYC was able to support us in getting resources and connecting us to elected representatives. I also participated last year in the virtual Public Policy Forum.”

As a family care provider and an advocate, Corrine feels the joy of seeing children grow and learn in her setting and beyond. She also knows firsthand the benefits of collaborating with colleagues across the state and country to push for the recognition, support, and compensation early childhood educators deserve.

SHARE YOUR STORY.  Answer a few questions to tell us about your work with young children and what NAEYC membership means to you.

NOMINATE A MEMBER.  Share why a NAEYC member you know should be recognized for their work with young children. (NAEYC.org/get-involved/membership/spotlight/nominate)

Copyright © 2022 by the National Association for the Education of Young Children. See Permissions and Reprints online at NAEYC.org/resources/permissions.