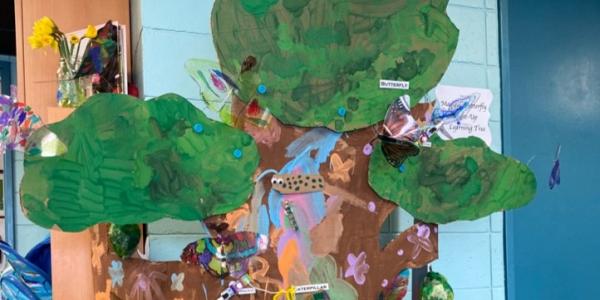 Editors’ Note: NAEYC’s Week of the Young Child (WOYC), a weeklong celebration of young children, families, and early childhood education, showcases the power and joy in early learning programs. During the 50th anniversary of WOYC, teachers of children ages 2 to 6 at a school in West Hartford, Connecticut, created a community building event that engaged children and families. Each class designed a tree as part of a division-wide Cardboard Challenge, which incorporated reusable materials and some new tools while developing skills and concepts across the curriculum. You can read more about integrating art and content in the Winter issue of Teaching Young Children.

As we looked ahead to NAEYC’s Week of the Young Child, teachers at the Beginning School (preschool through kindergarten) at Renbrook School in West Hartford, Connecticut, wanted to create a community building event with family involvement. Renbrook is an independent school for preschool through eighth grade. We decided to engage in a Cardboard Challenge focused on trees: How could children build a tree with cardboard-like materials and make it interactive? 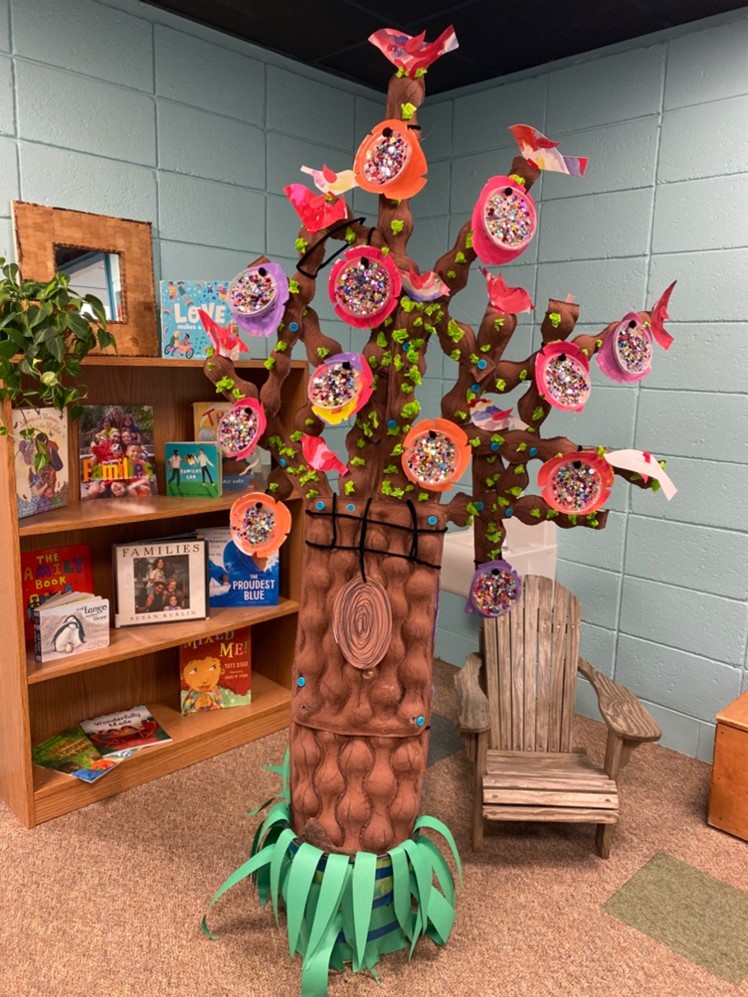 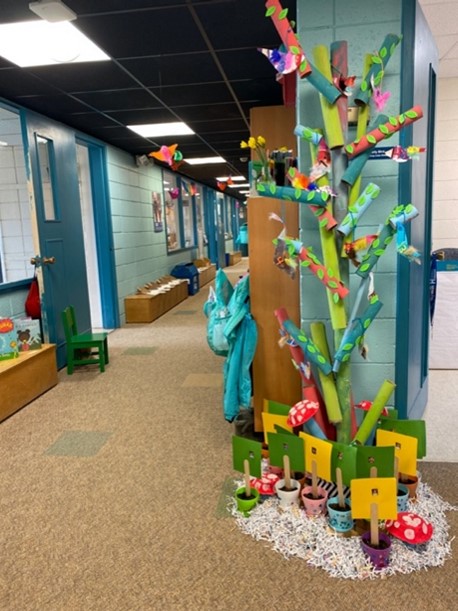 We prioritized reusable materials for our challenge, such as cardboard fruit dividers, boxes, tubes, and brown paper package filler. In addition, teachers collected plastic lids, corks, old spools, newspaper, and sticks gathered from the woods. Children examined these materials, decided how objects could be used to represent different parts of their trees, and looked for ways to assemble them. They used techniques for painting, gluing, and cutting that they had previously learned, and they incorporated new techniques, like using watercolors on coffee filters to create colorful, fluttering leaves. They also thought about ways to use flaps, doors, and/or QR codes to make the trees interactive.

As part of the creative process, teachers and children were invited to try some new tools. One preschool class learned how to use plastic screws and screwdrivers designed specifically for young hands. (We used Makedo; other options include zip ties, paper fasteners, and pipe cleaners.) Our children loved the challenge of puncturing cardboard with the tip of a screwdriver, inserting the screw, then securing it with the other side of the screwdriver. The screws let them create a joint with two pieces of cardboard, which allowed their tree’s branches to move. Children made their trees interactive by creating cherry blossoms on plastic lids that lifted to unveil a picture of each child. A QR code took visitors to a video of the class singing a song that helped them remember how things grow.

When asked how they wanted their tree to look, one pre-K class said they wanted it to light up. The class embarked on a short study of circuits and learned how they’re like a circle—each part is necessary for the others to work. We used a product called Little Bits to create circuits, but you could also use bulbs, battery packs, and electrical wire.

These materials and resources were new to both our children and teachers. They were motivated to learn how to use them because the context was authentic, and the project was meaningful to them. 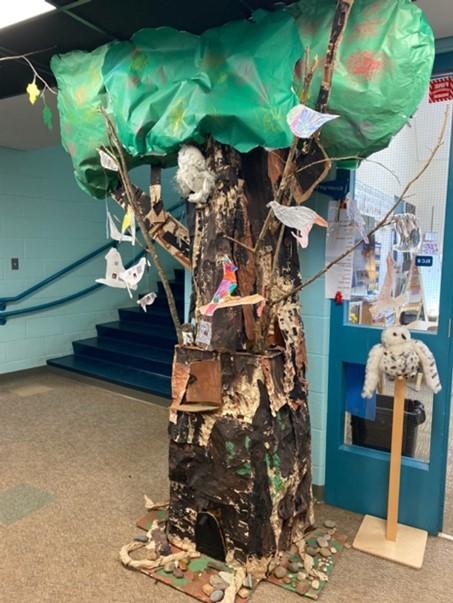 Classes naturally incorporated concepts they’d learned or were learning into their creations. Kindergartners, who were engaged in a nature study, chose local birds to research in books and on the Internet. Teachers made videos of the children sharing what they’d learned, which they linked to QR codes. During art time, the children drew their birds on sturdy cardstock. Teachers placed the corresponding video’s QR code on the back of each bird before hanging it on the class’s tree. Families and other visitors could access children’s videos by scanning the codes.

The junior kindergarten class decided to share what they had learned about monarch butterflies earlier in the year. They created each phase of the monarch’s life cycle, placing eggs, chrysalises, and butterflies throughout their tree. When a button next to each stage of the life cycle was pressed, the object representing it lit up, showing what children had learned about both monarchs and circuits! (If using self-assembled circuits, a lit bulb could illuminate each stage of the monarch’s life cycle.) Once the Cardboard Challenge ended, circuits were taken apart so they could be used for future projects. 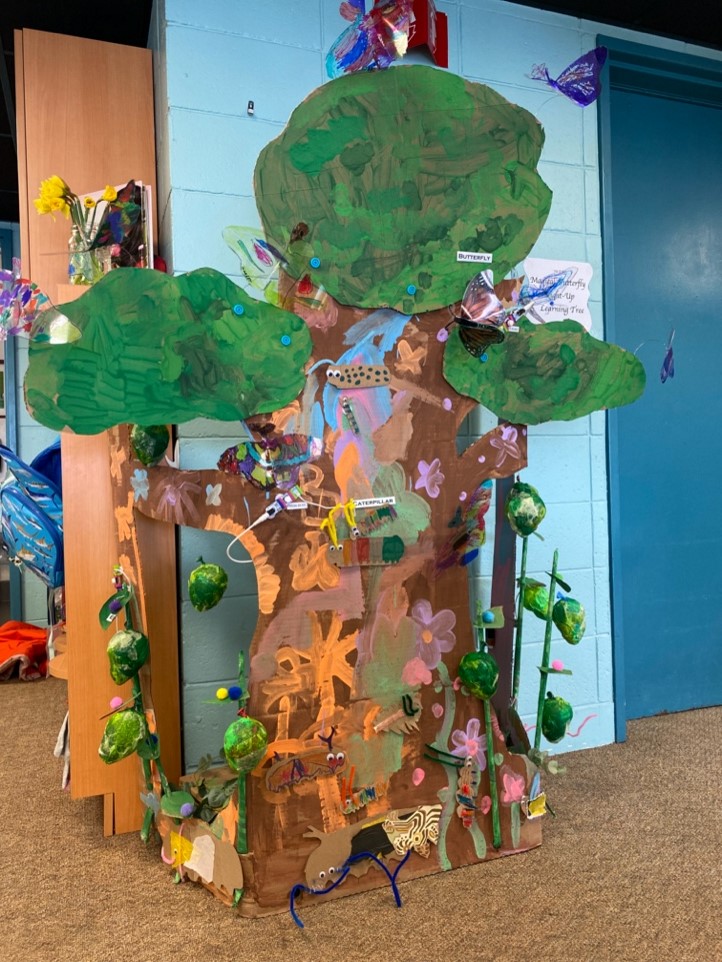 No Tree Looked the Same 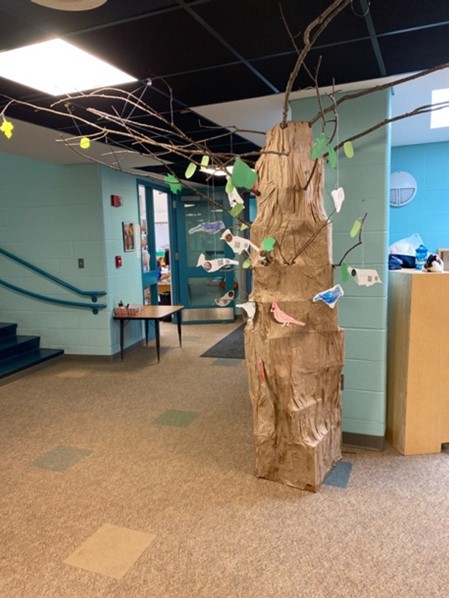 Each group of teachers and children came together as a class and created a tree that was wonderfully unique. Children were able to participate in the brainstorming and building processes, and their ideas were valued. When each tree was finished, it was placed in the hallway; as children walked the halls, they realized how many ways there are to represent a tree!

We invited families to tour our building with their children on a Friday after school. They had the freedom to see the work of our preschool-kindergarten, then we offered lemonade and cookies outside so that children could celebrate their great work and families could mingle with one another.

Kelly Bird, EdD, is the director of the Beginning School at Renbrook School in West Hartford, Connecticut, and teaches continuing education courses at Bank Street College of Education in New York. Dr. Bird has extensive experience facilitating diversity and inclusion conversations, reflecting her belief that children thrive in an environment in which they feel they belong. She is the president of Making Space and consults with schools on creating more equitable and interdisciplinary learning environments that promote student choice and participation.