Making and Tinkering at Home

At my last professional development conference, everyone was dressed up, seated in a large room at a fancy hotel, quiet, respectful, facing the four presenters. Suddenly, there was a frenzy of paper airplanes shooting from table to table. People were unfolding the planes, reading the notes inside. An unexpected  regression to junior high misbehavior? No, actually, this was a workshop to teach early childhood educators about tinkering and making things. Sending notes via airmail was completely encouraged by the presenters!

What is tinkering, anyhow? To uncover this definition, the lead presenter, Cate Heroman, author of Making and Tinkering with STEM: Solving Design Challenges with Young Children, talked about three elements that go hand in hand: tinkering, making, and engineering. Tinkering is “using stuff,” the open-ended exploration of materials, generally an internally motivated process. This is the platform for the concept of making, which is just what you’d think—creating something from an idea in your mind. Engineering the group defined as adding external constraints to this process—the creation “does stuff” and involves a problem to be solved.

The paper airplanes that sailed through the conference room were filled with secret messages—the memories of early childhood educators sharing the times when they, as children, had their best tinkering and making adventures. There were stories of helping to work on cars, taking apart appliances, making forts in the trees. . . .

My own memory was of myself seated beside a stream running down a muddy hill using various materials (including bits of mirror and wood) to influence the water’s flow. No one made me do it, there was no end product, but the process was joyful, fascinating, and very muddy. The presenters asked us how we could translate those experiences for our children, and they invited us to create “make spaces.”

One presenter, Peter Wardrip of the Children’s Museum of Pittsburgh, shared his process of creating a make space in the museum, where children from about 18 months to 8 years old, with their families, could explore tinkering and making. In this “makeshop” he brings in several elements:

So, for example, he proposed that museum visitors could help make a miniature city in the make space. Recycled cardboard, tape, scissors, and other art materials were provided on low tables. On the floor were tiny cardboard houses, trees, cars—all made by visitors to the space. While the very young participants might join in the fun by simply painting on cardboard with a paintbrush (tool) or by feeling the stickiness of the tape, older children were cutting, taping, investigating ways to attach wheels. . . .  This project was chosen because cardboard is easy to acquire, making it reasonable for children to continue tinkering and making when they left the museum.

Making and tinkering at home 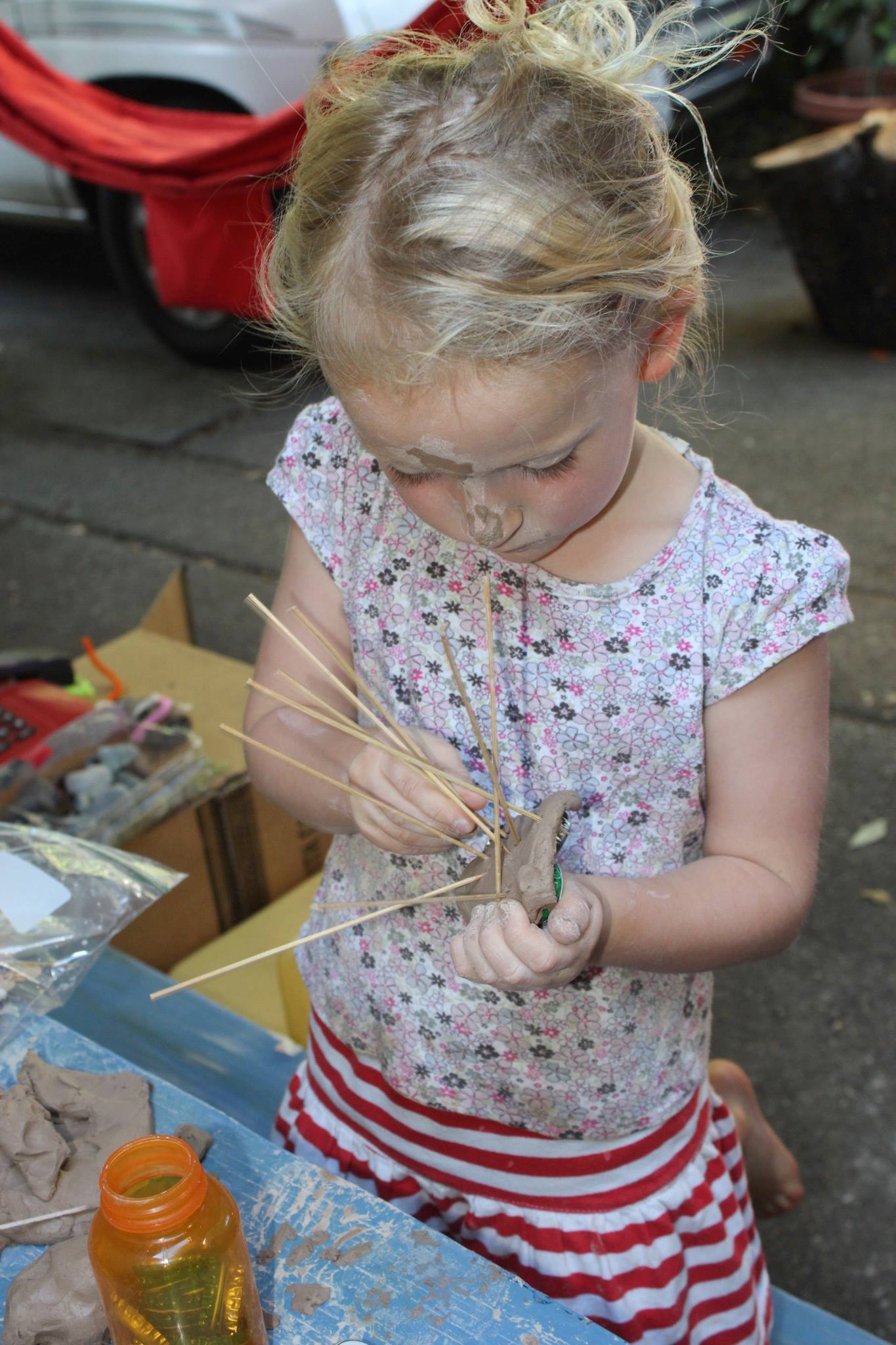 How might that translate for my then 4-year-old daughter at home? I may be tempted to toss the recyclables, keep the tape off-limits except when needed, and avoid the mess of paint. But If I do this, I deny her an opportunity to tinker and learn about how these things work. By providing opportunities for my child to tinker with a range of materials that are age appropriate, such as paint, cardboard, and tape, I can get a sense of what she can make,and I can see how it benefits her. As she handles a brush, I can watch her refine her grip on the tool and thus modify the kinds of marks she makes. Covering cardboard with pieces of masking tape, I can watch her learn about cause and effect, solve problem around the stickiness, and practice hand–eye coordination. If I add in a cardboard box and yogurt squeeze-pouch lids, I can watch her come up with a complex creation—a rocket ship with buttons!

The next two presenters at the making and tinkering workshop were speaking from a classroom perspective. Both articulated how they had created “makerspaces” in their classrooms. In these spaces, children were permitted to take safe risks with real tools. What does this mean? The teacher of the young 3-year-olds, for example, put in her makerspace blunt crochet needles designed to lace yarn through pre-punched holes in leather rectangles. Once the children had mastered the skill of using the needles as tools, these props were moved to the dramatic play area, inviting the creation of costumes.

Similarly, in the 4-year-olds classroom, children were invited to use real screwdrivers to unscrew the components of a VCR, as deconstruction is a precursor to construction. In the classroom with the oldest children, there were added elements of engineering (externally posed problems to be solved) when the transitional kindergartners were presented with Snap Circuits, a toy kit that invites direction following to create an object—such as a buzzer, a spinning motor, or a light—that makes certain actions occur using electronics. Listening to these presenters, I imagined how to create a make space for my daughter, picturing her in each of the classrooms trying out the materials there.

From theory to practice

The lead presenter returned to the spotlight, shifting our collective focus from theory to practice. How do you create a make space?

In our home, it was a whole family process; in fact, it took a community. “Create a tinkering habit,” the presenters urged, “and tinker yourself.”  The concept of the make space delighted family and friends, who brought materials, a table, a lifetime supply of masking tape, a circuit board . . . 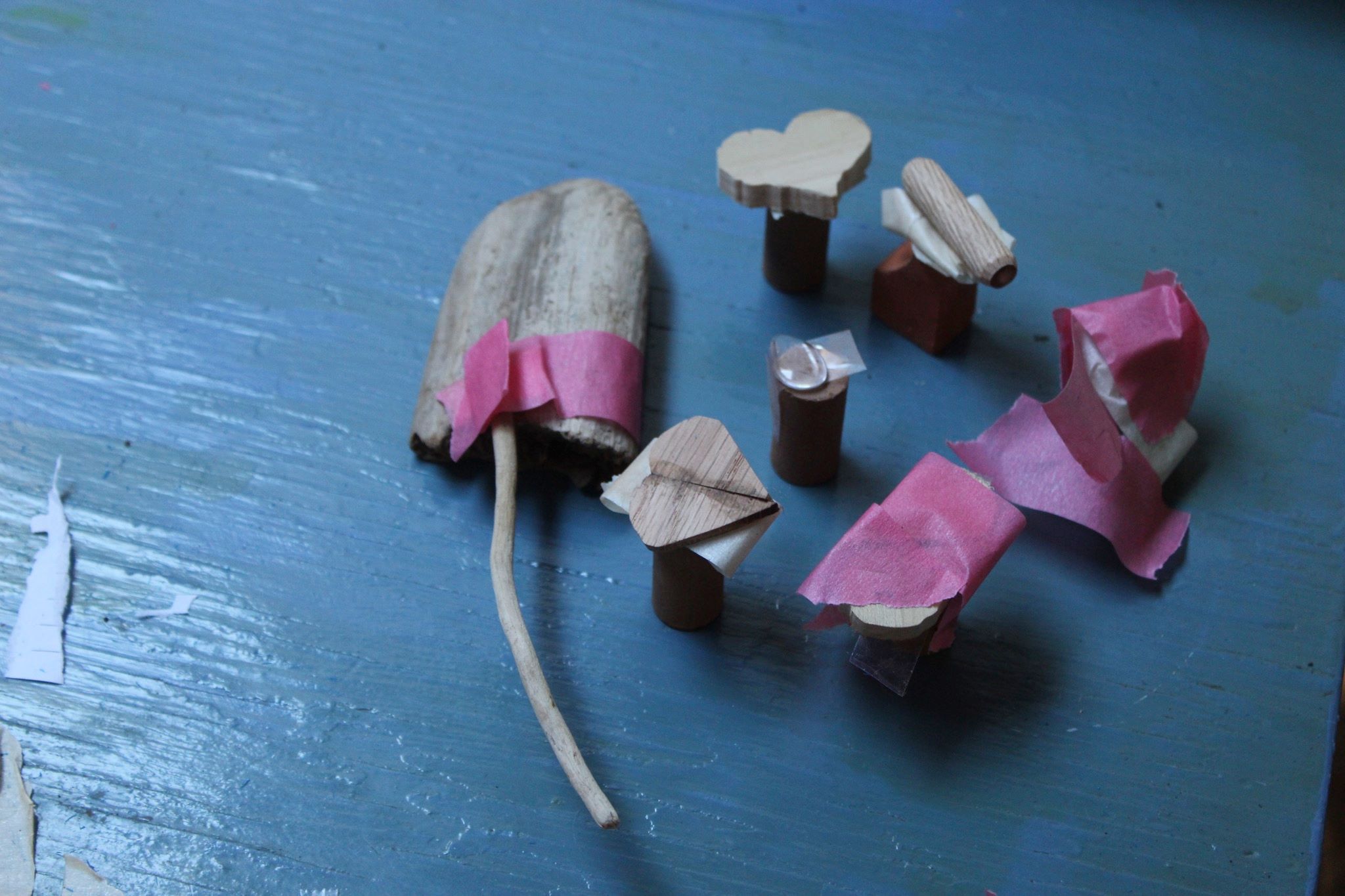 We adults found that it was hard to remember that tinkering is simply exploring the materials and should be an internal process for the child. When we introduced the tools or materials, talking a bit about how to use them safely and how to support your child in their use, we sometimes ended up taking over. This led to my daughter disliking the whole idea of tinkering; it was too hard and too adult led.  When we backed off and let her lead, her focus on the art materials, tape, and the many uses for pipe cleaners was very different from the circuitry we had introduced.

While we created a tinkering space separate from the rest of the house, you do not need a makerspace to tinker and make: it is a habit of thinking—a creative, open-ended state of being.

If you go back to the memory I shared from my own childhood, streaming water down a hill, diverting the path of the water with bright bits of mirror, I was  intent not on making a product, not on being lectured, and not on making something an adult knew the right answer to at a makerspace or science museum. This memory stays with me nearly 40 years later because I was so content in my self-led, problem-solving, creative process. In contrast, I remember very little about the formal science museums I went to as a child, where I tried the museums’ adult-generated engineering tasks. I did not take those lessons home and try them out in other settings.

Similarly, at home it was important to let the tinkering materials roam, making it okay to tinker anywhere, taping blocks together, color mixing with the bathwater, building blanket forts with chairs, mop, and broom. This invited transfer of learning rather than proposing that tinkering be done only during a short part of the day, in a specific location.

The conference ended, the participants gathered up their paper airplanes, their notes, their pencils. We were provided with resources—not only learning about Cate Heroman’s book, but also having access to hyperlinks—such as makeshoppgh.com to see examples from the Children’s Museum of Pittsburgh makeshop; Exploratorium’s free online Fundamentals of Tinkering courses (www.coursera.org/exploratorium); and NAEYC’s online tinkering workshop (www.naeyc.org/resources/pd/online-learning/hot-tinkering).

And so ends my own summer plan—investigating what tinkering means to me and my family. I wonder, Where might your own investigation take you?

The content in this blog post was adapted from the presentation by C. Heroman, P. Wardrip,  M. King, & C. Baker, “Making, Tinkering, and Makerspaces: What You Need to Know about Makerspaces and How Teachers Are Using Them in Their Classrooms,” at NAEYC”s Professional Development Institute, June 2017, in San Francisco.