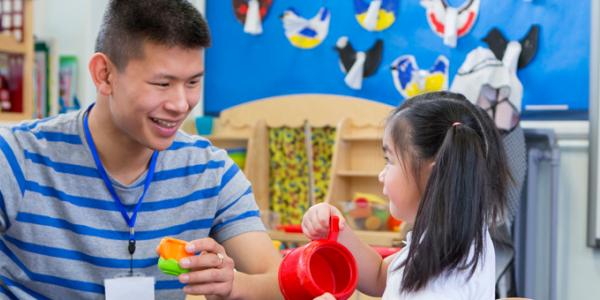 Four-year-old Jared and his teacher, Mary, look at the pile of multicolored blocks that are pregnant with possibilities. “Let’s build an airport,” Jared suggests. Mary becomes Jared’s assistant contractor: “You started the second floor of the airport when you put the blue block on top of the green block!”

The entire class sits riveted as Mr. Fernandez tells the story of a fire-breathing dragon and its attempt to enter the royal castle. After the story, the children play with toy dragons, castles, and even the proverbial damsel in distress. Vocabulary words like shield, moat, damsel, and crenulations—introduced and explained by Mr. Fernandez during the story—roll off the tongues, if imperfectly, of the 5-year-olds at play!

Decades of research suggest that children learn best when they are active (rather than passive), are engaged (not distracted), and find an activity meaningful, and when an activity is socially interactive (Hirsh-Pasek et al., forthcoming; Chi 2009). Play embodies each of these characteristics. Thus, it should be a top choice among educational pedagogies. Of late, however, play has become a four-letter word. Professor Ed Zigler, often called the father of Head Start, and Sandra Bishop-Josef warn that play is under siege (Zigler & Bishop-Josef 2009). The climate for play and playful learning has become so eroded that one teacher in the article by Trawick-Smith and colleagues notes, “I avoid using the P-word."

This volume is testimony to the value of playful learning and its rightful place among educational approaches in early education. Play and learning are not antithetical but are integrally connected. The debate about either educational classrooms or playful classrooms must be resolved in a way that respects the contributions of both to children’s development. It is in block play that Mary, above, introduces those spatial words like on top of, in, under, next to, and beside that will support later spatial and mathematical ability (Ferrara et al. 2011). It is through play that children try on new words just as they try on the costumes that transform them into knights and dragons and damsels.

The waves of educational history have both celebrated a whole-child, playful approach to learning and argued that playful learning robs children of their academic potential (Bishop-Josef & Zigler 2011; Zigler, Gilliam, & Barnett 2011). In the mid-1950s, with Piaget’s and Vygotsky’s theories prominent, play was considered the “work of childhood”—the arena in which children learn to solve problems and understand social rules. By 1957, the tide turned as headlines boasted the launch of the Soviet satellite Sputnik. Americans had to be prepared to compete in the new world order; academics and science were key, and play was a waste of time.

Benjamin Bloom’s classic Stability and Change in Human Characteristics (1964) reinforced this academic orientation in early childhood, proclaiming that IQ at 4 years of age accounted for a large portion of the variability in children’s later learning. But studies soon showed that IQ was not as malleable as believed, and in the 1970s and ’80s the pendulum shifted in favor of developmentally appropriate education. The move toward academic orientation resurfaced with the No Child Left Behind Act of 2001 and with mountains of research on young children showing that differences in learning trajectories are evident well before children stand on the doorstep of formal education.

What is an educator to do with this push and pull, with diametrically opposed philosophical positions? Perhaps it is time to reconcile the differences and to realize that we can have a strong curricular program while endorsing a playful pedagogy. Several prominent scholars have come to the same conclusion. In her “Memo to a Primary Grade Principal” on page 96 in this volume, Marilou Hyson concludes that “play is not a break from learning, but a pathway toward learning.” And Lynn Kagan and Amy Lowenstein comment, “The literature is clear: Diverse strategies that combine play and more structured efforts are effective accelerators of children’s readiness for school and long-term development” (2004, 72).

We must invest in playful learning that includes both free play and guided play. In both free and guided play, the child directs her own actions and creates her own plot lines. In guided play, however, children do this within adult-supported contexts, such as in Montessori classrooms (Lillard 2013), or with the assistance of an adult who follows their lead and scaffolds the play to a deeper level. The opening vignettes—Jared and Mary co-constructing the play around a block-building project and the play that emerges from the circle time reading in Mr. Fernandez’s class—are both examples of guided play. As these teachers introduce and use spatial and language concepts in the context of play and storytelling, the concepts become real and understandable to children.

While there are many benefits to free play (Gray 2013), our own work suggests that when there is a learning goal in mind, guided play trumps free play in achieving learning outcomes. And recent reviews of the literature on free play (Lillard et al. 2013; see also Golinkoff et al. 2013) also suggest that free play, while critically important for young children, might not provide children with the full learning benefits that emerge through guided play. Guided play preserves the child-directedness of play along with the joy of learning while also subtly supporting children as they move toward specified learning goals. It offers a midground position between direct instruction and playful learning, a way to design a strong curricular approach to learning that includes an optimal pedagogical approach for young children.

This book demonstrates how playful learning and guided play can spark a new era in early childhood educational reform. It is time to create learning environments that are active, engaging, meaningful, and socially interactive. In these environments, children will learn math and reading, social studies and science. But they will also learn something that might be even more precious and more important in school and throughout life: how to learn, attend, problem solve, and create. And that is a recipe for success in a fast-paced, global world.

From Spotlight on Young Children: Exploring Play, edited by H. Bohart, K. Charner, and D. Koralek. Copyright © 2015 by the National Association for the Education of Young Children.

In “A Conversation About Play,” Peter Pizzolongo and Kyle Snow discuss the value of play as something that children engage in “just because” and as a way that children learn. The examples in this article provide information for two of the activities in the professional development guide. 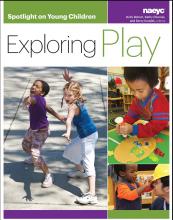