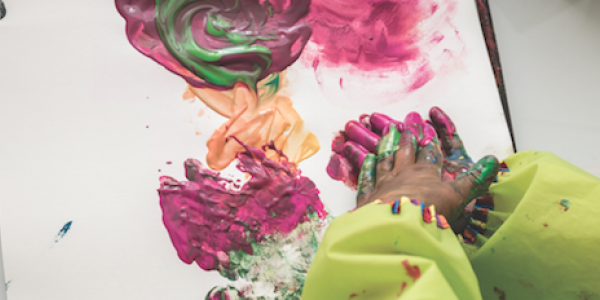 Read the following story and teacher reflections, and use the Reflective Questions to deepen your thinking and shape your teaching practices.

One day, I invited a group of eight children to join me in a separate room to focus on an in-depth investigation of creating transformative art. My plan was to introduce the children to color mixing. I hoped to help them learn about primary colors and how other colors are made from them. I offered each child a tray with a piece of paper and six empty cups. In the middle of the table, I placed cups filled with the three primary colors—red, yellow, and blue—along with eyedroppers to use for transferring and mixing colors. I demonstrated for the children how to use the eyedroppers to combine colors in the cups to see what new colors they could create.

Realizing I had forgotten to offer paintbrushes, I walked over to the shelf to get some. When I returned to the table, the children had already started mixing colors—but not how I had planned. I was dismayed initially. Then, as I watched closely, I went from bemused to amazed at what I saw unfold. The children had bypassed the cups altogether and instead applied the paint directly onto the paper to mix the colors.

I watched as Cami took an eyedropper of red paint and squeezed a drop of it onto her paper. She then squirted blue paint onto the red. The colors began to combine and change.

“Yep, that is exactly what combining the colors red and blue does; it makes purple,” I responded. “What happens if you mix red and yellow together?”

The children set about color mixing with gusto. They combined droplets of primary colors on the paper to make new colors. Again, the children had a different idea than I had planned. After adding more drops, they picked up their papers and waved them around to mix pools of paints together, making beautiful colors and swirling designs.

When the group met a few days later, they continued to be excited about color mixing. This time, they wanted to see what would happen if they added more blue to a mixture of purple. They were also curious about what would happen if they added yellow to the blue, and were excited by the green color they created. The vibrant colors they invented with their discoveries were stunning!

Next, I offered white and black paint, and the children eagerly investigated how they could make darker and lighter shades of the colors.

When I started the color-mixing investigation, I hoped the children would learn that by mixing just a few colors, they could make many more. I wanted them to understand that most colors are made from just three primary colors. While planning, I eagerly imagined seeing their amazed reactions as they dropped each color into the containers, watching as a new color emerged. 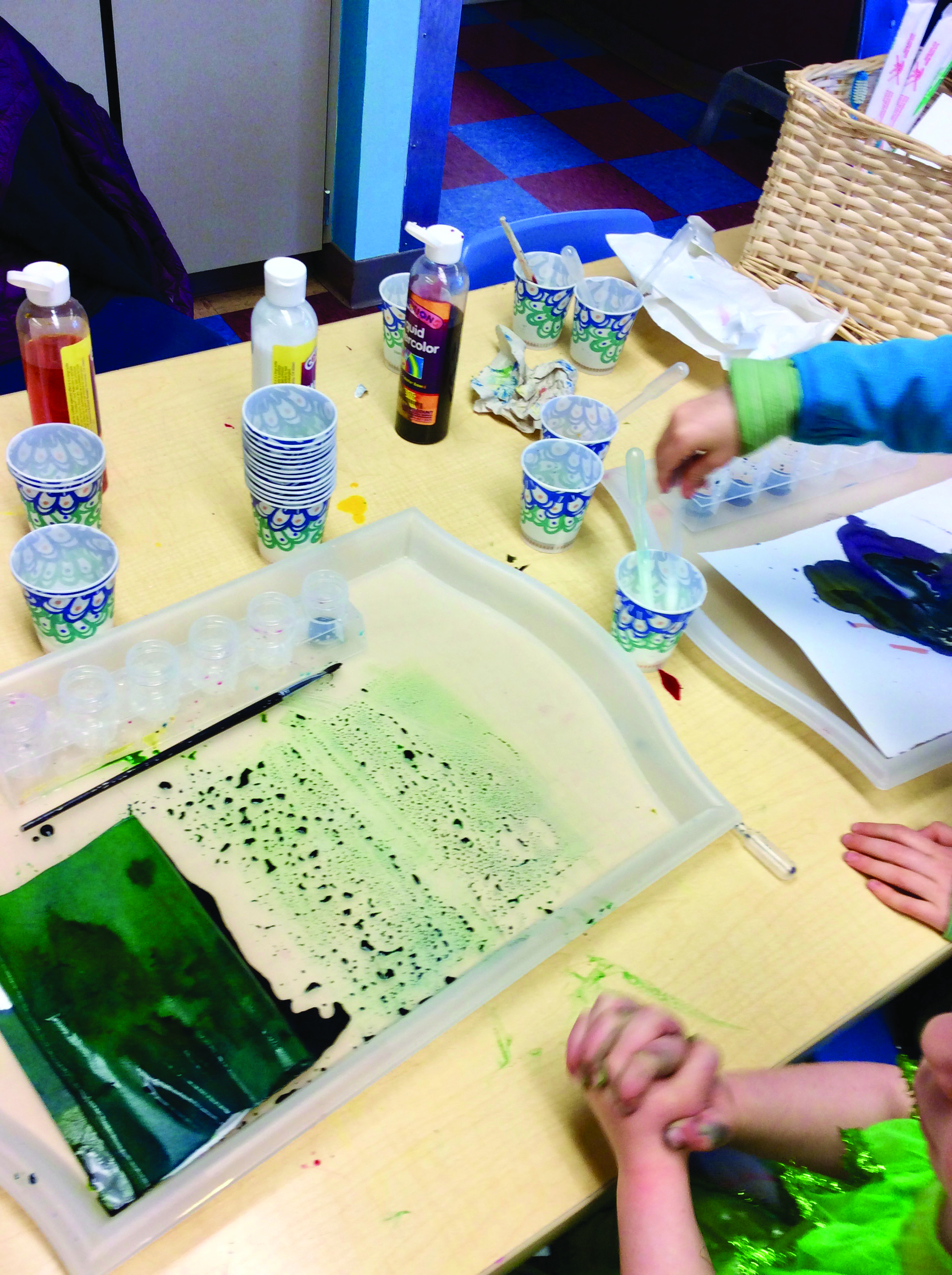 In the classroom, I felt disappointed and anxious as they changed my beautiful, carefully constructed color-mixing activity. But soon, I began to hear oooh’s and ahhhh’s and to appreciate the wonder of discovery the children experienced as they created new colors. I made a conscious decision to sit back and just watch instead of stopping the way they were interacting with the materials. 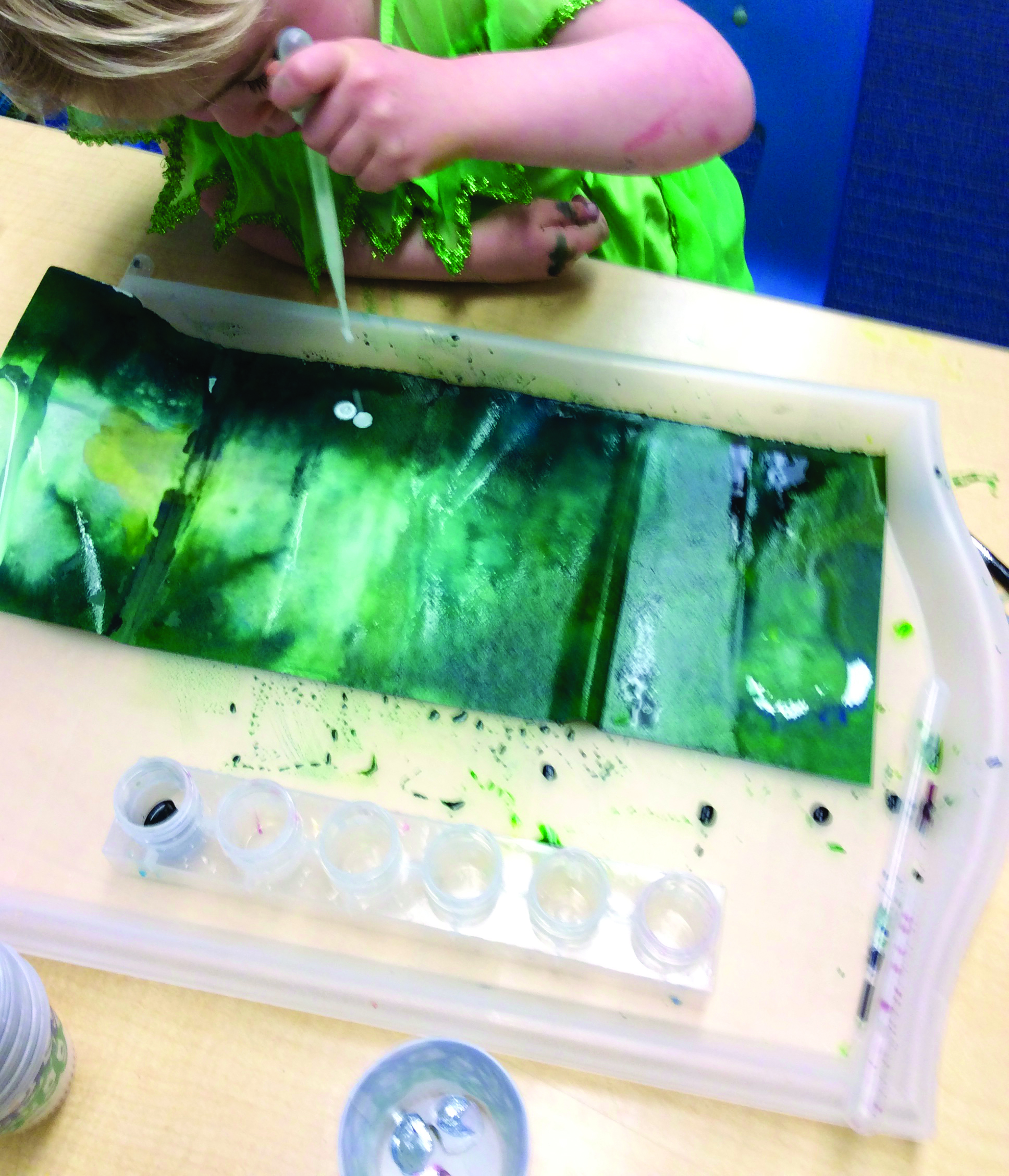 I realized as I watched that they were having the exact learning experience that I was hoping for, just not the way I had planned. I sat with my hands over my mouth (yes, I really did this!), so I would not interfere with their process. I wanted to see and understand why all of the children had decided to mix the colors directly on the paper. 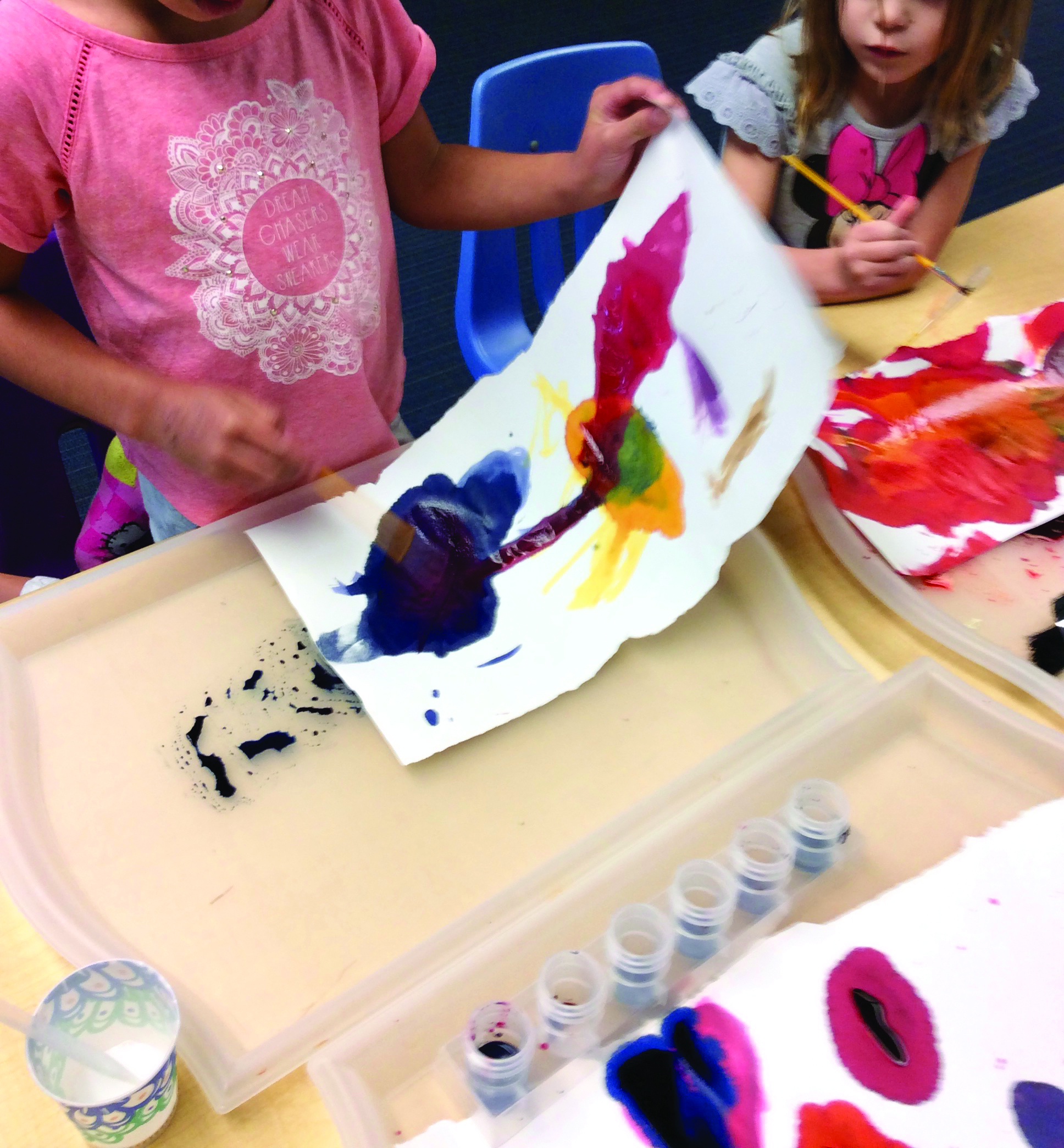 I saw that to the children, mixing the colors into the cups was an extra, unnecessary step. The children’s approach was different than mine; they experienced me as a “talking head.” Their way of working with the materials was more fun, and taking the initiative seemed to heighten their involvement and the intensity of their discoveries.

One of my goals for the color-mixing lesson was to offer children opportunities to interact and exchange ideas. I was uncertain whether their newfound approach would enable this. But I have to admit that the way I had presented the activity did not allow for much peer-to-peer interaction and would have ultimately failed to provide opportunities for collaboration. This was not an easy thing for a teacher to admit, but there it was right in front of my face. Instinctively, the children had transformed my activity into an active exchange of ideas:

Ellie: How do you make green?

Maura: You mix blue and yellow together.

Maura: I’ll come and show you. (Maura walks around the table and picks up two eyedroppers. She starts adding the colors together on the paper. Other children stop what they are doing and come over to watch how Maura makes green.)

Maura: You need to add more yellow, then blue to make a really bright green, see?

Ellie: Oh, I have an idea, keep dropping the colors.

Ellie then got a paintbrush and mixed blue and yellow together on the paper. Maura dropped more colors on the paper as Ellie directed her to add more and fewer drops of color. She started to laugh as they produced the color of green she wanted. I watched in amazement: the children were sharing ideas and techniques for mixing the colors!

As a teacher, I need to do more listening and watching. I realize that there are real reasons why children sometimes do not follow my instructions for activities. When this happens, I need to be humble enough to observe and try to understand why—even if it means admitting that having a preconceived way of completing an activity can get in the way of actual learning. As a teacher, I’ve learned that sometimes my plans will fail—and that’s alright. Now, I feel secure enough to fall on my face every once in a while, because it is during these moments that learning and growth happen, not just for the children but for me as a teacher.

As I go forward with explorations of different art materials, I am promising myself to try not to interfere when it looks like the children are changing my activity. I want to go with the flow.

Use the following questions from the Thinking Lens® to reflect alone or with a colleague.

Consider opportunities and possibilities for next steps 

Laurie Goff is a preschool teacher at Interlaken Preschool, in Seattle, Washington.

Deb Curtis has spent the past 40 years working with children and teachers in early childhood programs. She developed the Thinking Lens with Margie Carter and Ann Pelo.