Our Proud Heritage: The 200-Year Legacy of Infant Schools 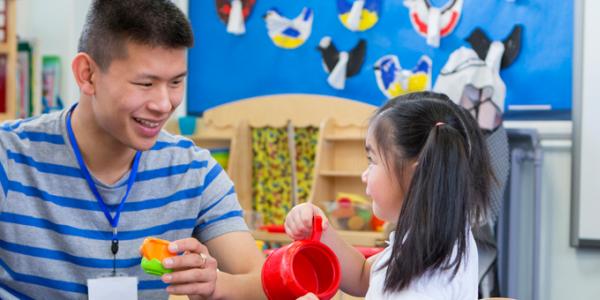 The early childhood education field includes an array of curriculum models. In Approaches to Early Childhood Education, Roopnarine and Johnson (2013) describe nine specific approaches used in today’s preschools, ranging from the US-based HighScope model to approaches with European origins, such as Reggio Emilia and Montessori. However, as Milly Almy (1986) observed nearly 30 years ago in the inaugural issue of Early Childhood Education Quarterly, the early childhood education field can be characterized by uniformity. She quoted a colleague who had asked her, “Why is it that whether I go to Kenya, Israel, Bolivia, or Australia, the programs look and sound so much alike?” (7), despite the diversity of the children and families the programs serve. As David Weikart (2003) highlighted in his summary of the IEA Preprimary Project research involving 15 countries, “dependence on a whole group organization in early childhood care and education settings is international” (245). We believe the global trend emphasizing more structured programs for young children, particularly those from families with low incomes, has its roots in the past (Cleghorn & Prochner 2010), and we explain this by using a historical example and by drawing on Everett Rogers’s (2003) diffusion of innovations theory.

According to Everett Rogers’s (2003) diffusion of innovations theory, ideas spread more quickly when they

A new approach in the 1820s—infant schools

Schools for young children in early-19th century Britain were organized in two ways: as private “dame schools” for children from working-class families, led by neighborhood women in their homes, and as infant schools, led by teachers for children from the time they could walk until 7 years of age (Rusk 1933; Whitbread 1972). Our focus is on the history of infant schools. The infant school approach to preschool education spread to European colonies, and was common in many parts of the world beginning in the mid-1820s (May, Kaur, & Prochner 2014). Infant schools were originally associated with Christian missions or operated by charities. Later, the social elite—in some cases from among the colonizers and in others, members of the local elite—adopted them as preparatory schools for their own children.

The infant school movement, which started in 1816, began as a single project in New Lanark, Scotland, when mill owner Robert Owen began providing child care and early learning opportunities for mill workers’ children. Owen’s vision for the school was drawn from reform-minded educators such as the Swiss education reformer Johann Pestalozzi, who, like Owen, sought to use education to help the poor. Owen’s ideas about education were progressive and even radical, stating “books in infant schools are worse than useless” (1857, 175), that teaching should be organized around children’s interests, and that learning should occur through play and exploration with “some useful object within their capacity to comprehend” (175).

When the infant school approach spread beyond New Lanark, practical and social pressures, as well as ideological differences, helped transform Owen’s infant school model into a structured program with a heavy emphasis on religious education and early literacy (Silver 1977). Rogers’s (2003) diffusion of innovations theory helps explain why this metamorphosis occurred. The theory provides a framework for understanding how and why new ideas are adopted or reinvented. He suggests that reinvention is more common when ideas are “relatively more complex and difficult to understand” and that “reinvention in such cases may be a simplification of the innovation, or even represent a misunderstanding of it” (186).

During the late 1820s, this was the case in the newly opened infant schools located in the urban centers of Europe and countries beyond, including the United States. The schools provided academic instruction, moral training, and child care. They differed from day nurseries that developed later in the century to provide custodial care, without the benefit of academic instruction, for children as a charitable service for wage-earning mothers (Rose 1999). Infant school teachers needed practical teaching strategies for classes with 150 to 200 very young pupils, and as such, they embraced Joseph Lancaster’s monitorial method of instruction—which in Owen’s schools had been used for older children. Under the direction of one teaching master, slightly older pupils (age 5 or 6) served as apprentices monitoring the other children, who had been grouped by ability. An assistant was generally employed to teach the youngest children. The ideas of Pestalozzi, whose method involved learning from nature using sensory information, were reduced to “picture lessons” with scripted questions and answers. The schools were also under intense community pressure to teach reading. As the English evangelical teachers Thomas Bilby and R.B. Ridgway (1834) remarked, “The parent’s constant cry is (and we think justly so too), the book—the book” (168), referring to the importance of instruction in reading in the general sense.

The main elements of the reinvented infant school program were

What can we learn?

Robert Owen designed his infant school as a vehicle for educational and social reform—not neces­sarily as a template for widespread practice. As it spread beyond New Lanark, many of Owen’s original education principles were diluted or removed through the process of reinvention. A structured version of the infant school program was easily adopted in diverse situations, but ideas about early learning shifted in the 1830s, and infant schools fell out of favor, blamed for harming children through “early mental excitement” (Brigham 1833, 55). In the 200 years since the start of the New Lanark infant school, scores of other early education philosophies and approaches have emerged, with some—such as Froebel’s kindergarten and Montessori’s method—standing the test of time. Yet elements of the infant school, such as those described by Almy (1986)—from orientation to teaching through play (including play outdoors), to the use of signals to gain children’s attention—have endured, helping to give preschool its uniform look. More critical for early education policy in the United States, this first-wave preschool movement primed some social policy makers to view academically oriented preschool as a core poverty-reduction program.

The ideas discussed in this column remind us that the debates about what is best for young children from families with low incomes have changed very little over time (OHS 2007). Whether the recommended approach is meant to provide moral training for children from economically disadvantaged homes in the 19th century, or to ensure all children, including those from families with low incomes, have opportunities to learn, many educators believe that a period of “catching up” is needed. We contend that diverse and culturally responsive preschool programs can play an important role in supporting social change.

Silver, H. 1977. The Concept of Popular Education: A Study of Ideas and Social Movements in the Early Nineteenth Century. Lanham, MD: Rowman & Littlefield.

Whitbread, N. 1972. The Evolution of the Nursery-Infant School: A History of Infant and Nursery Education in Britain, 1800–1970. New York: Routledge.

Larry Prochner, EdD, is professor of early childhood education at the University of Alberta, in Edmonton, and co-president of the International Froebel Society. Larry is working on a history of forest kindergartens in England, Germany, and the United States. [email protected]

Ailie Cleghorn, PhD, is professor of education at Concordia University, in Montreal. Her research centers on African and other still-developing primary and preprimary school settings, with special regard to language of instruction, science education, the use of text materials, and cross-cultural conceptions of childhood.

Jennifer Drefs, MEd, is currently teaching kindergarten with Sturgeon School Division, in Morinville, Alberta. She has taught children in a variety of learning environments, from junior kindergarten to grade 2. Her research interests include family culture in schools.