What the Research Says: Impact of Specific Toys on Play 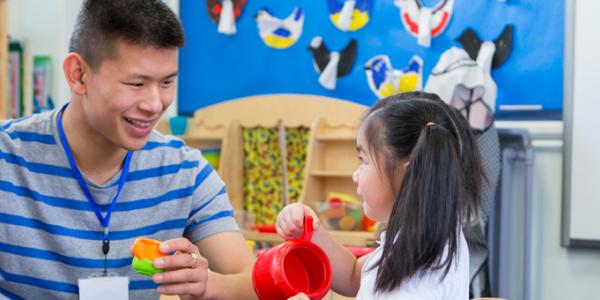 Home / What the Research Says: Impact of Specific Toys on Play

NAEYC asked two researchers about what their work tells us about toys, children, and play. Jeffrey Trawick-Smith is Professor of Early Childhood Education at the Center for Early Childhood Education at Eastern Connecticut State University in Willimantic, Connecticut. We talked to him about the impact different types of toys have on play. We also spoke to Judith Elaine Blakemore, professor of psychology and associate dean at Indiana University−Purdue University in Fort Wayne, Indiana, about gender-typed toys.

Tell us about your toy research.

Professor Trawick-Smith: Studies have looked at the impact of peers, teachers, families, and classroom and home environments on play interactions. But few studies have looked at the effects of individual toys on play activities. This is surprising, since about 90 percent of preschool children’s play in the United States involves a toy. So, our center conducts an annual study in which we observe children playing with a variety of toys-nominated by teachers, parents, researchers, and even children—in a free play setting in preschool classrooms. We code children’s use of the toys in three areas, using a coding instrument that we have developed: thinking/learning/problem solving, social interaction, and creativity.

What message do you think early childhood teachers and other educators could take from your research?

Professor Trawick-Smith: The most important finding emerging from our studies is that different toys impact children’s behavior in different ways. Some toys have a powerful influence on children’s thinking, interaction with peers, and creative expression. Other toys do not. Some of the toys that look most interesting to adults are not particularly effective in promoting development. This suggests that teachers can make decisions about toys as thoughtfully as they do when making decisions about any other area of the curriculum. Once toys are selected, teachers can carefully observe their impact on children’s play. Do toys elicit a good balance of play behaviors, across social, intellectual, and creative areas of development?

What message about toys do you think families of young children could take from your research?

Professor Trawick-Smith: We are cautious about recommending specific toys to families. This is because play interests vary greatly across cultures, children and families. However, one trend that is emerging from our studies can serve as a guide to families as they choose toys: Basic is better. The highest-scoring toys so far have been quite simple: hardwood blocks, a set of wooden vehicles and road signs, and classic wooden construction toys. These toys are relatively open-ended, so children can use them in multiple ways. Also, they have all been around for a long time. There may be a reason these toys have been enjoyed by children over the generations! Simple, classic toys would be our recommendation for families.

What's the most surprising thing you think your research tells us about children, toys, and play?

Professor Trawick-Smith: We have found some surprising gender differences in our study. Many of the toys nominated by parents and teachers were used most often and in the most complex ways by boys. This included items that seemed gender-neutral from an adult perspective. What set the highest-scoring toys apart was that they prompted problem solving, social interaction, and creative expression in both boys and girls. Interestingly, toys that have traditionally been viewed as male oriented—construction toys and toy vehicles, for example—elicited the highest quality play among girls. So, try to set aside previous conceptions about what inspires male and female play and objectively observe toy effects to be sure boys and girls equally benefit from play materials.

Professor Trawick-Smith directs the TIMPANI toy study, which looks at how young children in natural settings play with a variety of toys.