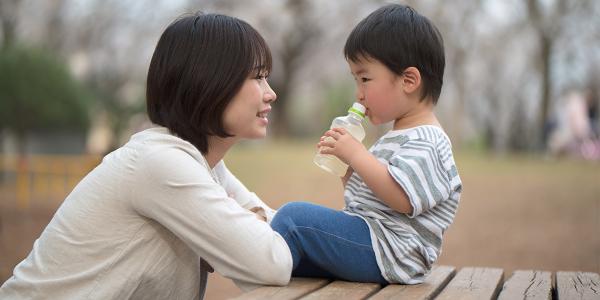 Asking children questions is a way to guide them toward healthy behaviors by helping them  think about what they do—and what effect they have on others. Over the course of many years, children who receive lots of gentle reminders—often in the form of questions—develop the ability to think about behaviors before doing them. For families, it can be hard to remain patient and calm as a toddler grabs a toy from a playmate or a 5-year-old throws a snack she doesn’t like on the floor. It can be tempting to punish children to quickly put a stop to their behavior—but punishment often teaches children little about better alternative behaviors and it runs the risk of emotional harm.

What just happened here? is an excellent question after a child’s behavior has caused a problem (e.g., maybe he has just knocked over a lamp while running in the house). It is important that he not be afraid that he will be punished when you ask the question, as that fear may limit a child’s ability to think. The child will not be afraid if the relationship with the caregiver has been gentle throughout the child’s experiences and never (or rarely!) impatient with her learning from mistakes. Many people think that a child is getting away with something if we don’t punish them, but thinking about the behavior develops the improved behaviors far better than punishment would have.

Asking a question before an action is also an excellent way to encourage good behaviors. For example, when getting a child dressed for going outside, asking Is it going to be cold outside? is a more helpful and thought-provoking than simply telling him to put his coat on.

Asking a child about his behavior can stop the behavior as it is happening and get him to think about it. The best questions are ones that require more than a yes-or-no answer. Here are some examples.

The feelings we express when we question children are very important. Children know when we are upset with them. If we display anger or irritation, they may feel anxiety or fear—and that’s when they aren’t doing their best thinking. But if we can stay calm and warm as we ask these guiding questions, we’ll see that troublesome behaviors end more quickly and become less common.

Asking children open-ended questions starts a conversation—and builds a relationship—and it even helps develop children’s brains. Asking them open-ended questions that help them think about how they want to behave, supports reflection, and increases self-control over time.

Dr. Wright retired from four decades of counseling as a licensed psychologist, occasionally teaching as an adjunct instructor at five different colleges. He is now a Child Development Consultant on the Flathead Reservation.