Playing math games with children can be a fun, developmentally appropriate way to spark understanding of big mathematical ideas. Math games also support children’s mathematical habits of mind—and key school readiness skills, such as problem solving, puzzling, and perseverance. When we watch and listen to how children play math games, we learn a lot about the mathematics they already know and what they’re ready to learn.

This is the first article in a series about math games and how they support preschooler math readiness.

What are dot card and finger games?

Dot card games are simple and can be played again and again. They use cards that have one to 10 black dots arranged in different configurations—linear (straight line), rectangular, dice pattern, circular, and scattered configurations.

We often ask children to count a line of objects, but circular and scattered arrangements are harder to count one by one! These games support children’s ability to subitize—that is, to immediately see how many without counting, a key factor relating to young children’s math ability.

Finger games promote children’s understanding of early math concepts, from counting to composing and decomposing number (the foundation of addition and subtraction). When children use their fingers to count, they are strengthening their number knowledge and their ability to visualize numbers in their minds. Finger games can be played anytime, anywhere, since your fingers are always with you!

Here are some math games for children to enjoy using dot cards and fingers. Observe children as they play, and use the information in the “Things to notice as children play” sections of each game to learn more about the mathematics supported while children play these games.

Encourage children to quickly “see” how many dots are on the cards—particularly for cards with three or fewer dots. When children subitize and immediately “know” five dots, you might ask, “How did you see five dots so quickly? Did you group them?” Children do not need to count one by one for every card. If children always count one by one, they sometimes become less proficient at subitizing.

Dot card sets are available to print at www.ym.edc.org/dotcard. Sets are 2½ x 2½ and 5 x 5 inches. You’ll need the following:

Tips for extending the learning

You’ll find more than one version of each game.

Focus on one-to-one correspondence and cardinality.

Give each child one large dot card and some tokens (usually a few more than they need to cover the dots on the card).
Ask children to count one-by-one as they cover each dot with a token.

Give each child one large dot card, a blank 5 x 5 inch card, and some tokens (usually a few more than they need).
Have children re-create their dot card using the tokens on the blank card.

In Game 1, putting tokens on dots while counting reinforces one-to-one correspondence. Ask, “How many dots did you cover?” If children can tell you the total, they are beginning to understand cardinality. If they recount when you ask “How many?,” they may be still working on understanding cardinality. In Game 2, counting out the tokens to a certain number reinforces cardinality, and re-creating a configuration encourages children to pay attention to orientation and spacing (important early literacy skills).

Focus on subitizing and comparing numbers.

Focus on comparing numbers and vocabulary.
Ages 3–5 | 5–10 minutes
For these games, place three to six dot cards on the table or give each child three to six cards.

Subitize at home. After dinner, grab a small handful of cereal and scatter the pieces on the table. Up to how many pieces can you recognize without counting? It’s more fun for adults than you might think.

Fingers instead of dots! 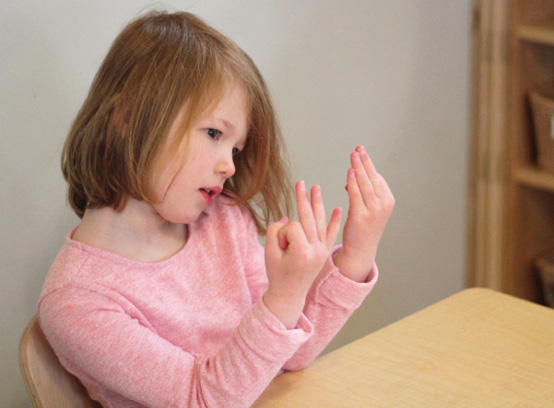 These finger games address the same math concepts as the dot card games. Children can have fun practicing their math skills in a new format. All that’s needed are fingers!

The critical learning in this game is that numbers can be composed (or made) in different ways. You can make 5 with five fingers on one hand and zero on the other, or with four and one, or with three and two. These different combinations all make five. This helps children recognize that smaller numbers are part of larger numbers (e.g., 3 and 1 are two parts of 4).

Make copies of the finger game instructions to send home with families. Print and send home math mini-books—find them at NAEYC.org/math-at-home.

Cardinality. Children may count accurately (with one-to-one correspondence) but not yet recognize that the last number tells them the total amount. After children count a set of objects, ask, “How many do you have?” If they state the total number, they show an understanding of cardinality. If they recount the set, they may not understand cardinality yet. You can support cardinality by saying the total number after counting: “1, 2, 3. We have three pennies!” Another part of cardinality is counting out a specific number of objects (“Give me two tokens”). When counting out, children have to remember the number of tokens needed, count correctly, and know to stop when they reach that number.

Composing and decomposing number. This refers to recognizing that numbers (or sets of objects) can be combined or separated to make other numbers. Children learn that a whole is made up of smaller parts and those parts are smaller than the whole. (If there are 4 paintbrushes and 3 are being used, only 1 paintbrush is left.) Preschoolers can recognize that smaller numbers are “hiding inside” larger numbers: 1 and 3 are hiding inside 4 (so are 2 and 2).

Numeral recognition. In preschool, children begin to connect what they are counting and how they are counting to written number symbols. They begin to understand how a quantity (number of blocks) relates to the number word (two) and to the written numeral (2). As children play dot card and finger games, you can bring these ideas together by pointing to a number line, number chart, or written numerals in your classroom. Encourage children to see written numerals as symbols to help them express what they are thinking and to easily communicate with others (writing 5 is quicker than drawing five blocks).

One-to-one correspondence. When children have mastered one-to-one correspondence, they connect one number word to one object. For example, a child counts three cubes as “One, two, three,” touching each cube only once and saying only one number word for each cube. Young children often say numbers and touch objects at different rates, going through the right actions (reciting and touching) but not yet in a coordinated way. Sometimes they say their words too quickly and sometimes they move their finger too fast. Support children by slowing down and modeling how each object needs one touch and one number word, and no objects should be skipped. Say, “You might have missed one. Can you check?”

Subitizing. This means instantly seeing how many in a small quantity. The word subitizing comes from the Latin word meaning suddenly. Children usually recognize 1 to 2 dots or fingers without counting “One, two.” But there are limits to what we see automatically. For larger quantities, we may cluster or chunk objects into smaller groups in order to know how many. In general, 8 dots are too many to see immediately as 8, but if they’re arranged so we can easily see them as two groups of four, and if we know that two 4s make 8, we instantly see 8. Circular and scattered objects are harder to subitize. 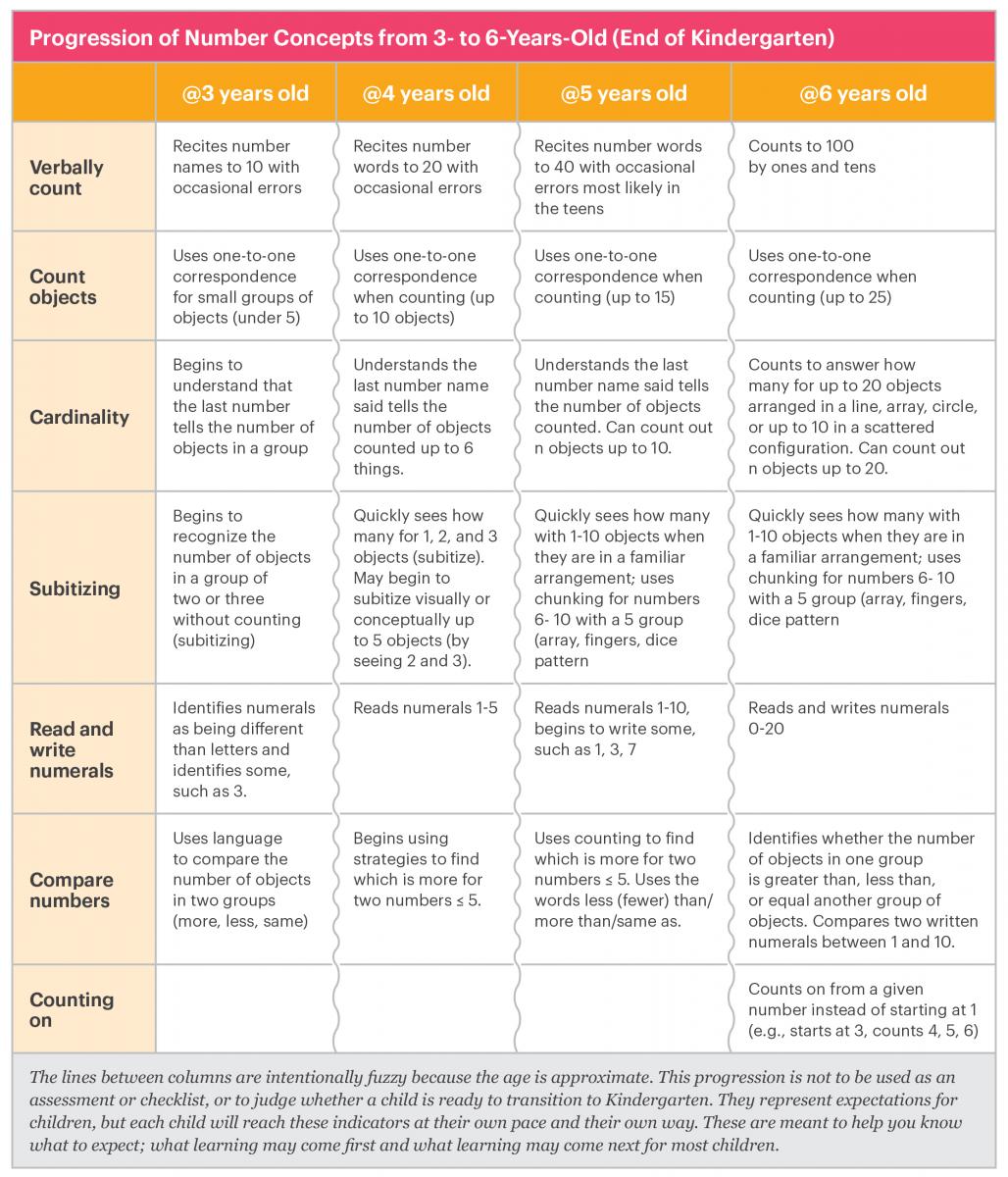 This information has been adapted from Games for Young Mathematicians, a program of research in early mathematics at the Education Development Center (EDC), supported by funding from the National Science Foundation and Heising-Simons Foundation. For more math information and games, visit http://youngmathematicians.edc.org.